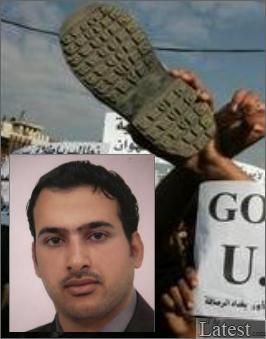 Britain's Green Party has backed the Iraqi journalist who was catapulted from obscurity to worldwide fame after hurling his shoes at the US President, George Bush. They are calling for the immediate release from detention of Muntazer al-Zaidi, aged 29, for what the Iraqi authorities claim was his "barbaric and ignominious act".

"The Green Party calls on the British government to condemn the torture and prosecution of the Baghdad shoe-thrower, Muntadar al-Zaidi, and to demand his immediate release and the dropping of all charges against him. If Mr al-Zaidi feels it is no longer safe for him to remain in Iraq, we urge Gordon Brown to offer him political asylum in the UK," said Peter Tatchell, the human rights spokesperson for the Green Party of England and Wales, and the party's parliamentary candidate for Oxford East.

"The overthrow of Saddam Hussein was supposed to usher in a new era of democracy and human rights. The torture and prosecution of the shoe-thrower is an ugly revival of the abuses that existed under the Baathist dictatorship. It is not what we expect in post-Saddam Iraq," added Tatchell.

Al-Zaidi is due to stand trial in Baghdad on Wednesday 31 December.

Meanwhile, to express his support for the shoe-thrower, Norwich Green councillor Rupert Read, the Green Party's lead candidate for the Eastern Region in the June 2009 European Parliament elections, has posted a pair of his old shoes, one each to Gordon Brown and George Bush, and posted a video of his doing so on the internet:

Peter Tatchell explained why the Green Party is backing the shoe-thrower:

"Mr al-Zaidi's protest was a courageous, symbolic gesture to challenge the US President's illegal invasion and occupation of Iraq, the mass civilian casualties caused by the war, the use of torture by US military forces and the US attempt to rip off Iraq's oil wealth.

"His heroic action was in the fine traditions of the young men who burned their draft cards to protest against the US war in Vietnam and of the Black Power salutes by Tommie Smith and John Carlos at the 1968 Mexico Olympics in protest at the racist discrimination suffered by African-Americans.

"Mr al-Zaidi's did not physically harm anyone or cause any damage  — only embarrassment to President Bush and the Iraqi Prime Minister, Nouri al-Maliki. Causing embarrassment should not be a crime. To prosecute him for this protest is petty and disproportionate; unbefitting Iraq's new democracy," said Tatchell.

There is evidence that Mr al-Zaidi has been beaten in the face by prison guards, and his brother says that Muntadar has lost a tooth, has had ribs broken and has been burned with cigarettes.

Al-Zaidi could face between five and 15 years in prison, under draconian Iraqi laws that echo Saddam Hussein's repressive tyranny.

Cllr Read explained why he posted his shoes to the British Prime Minister and the US President:

"I thought this was a good way to highlight my support for the show-thrower and to remind the government of its duty to defend human rights in Iraq. Maybe if enough of us do this and protest in other ways, then the spotlight of publicity will shame the governments of Iraq, Britain and the US into treating this courageous protester more fairly and humanely."

"Al-Zaidi's trial starts on 31 December. Let's keep this man, with whom so many of us sympathise, out of prison. The charges against him should be dropped. Given the physical brutality he has already suffered, Muntadar deserves his immediate freedom," said Cllr Read.

US business and its Baghdad bonanza