We’ve been watching with close interest British media coverage of the hotly contested battle between Hillary Clinton and Bernie Sanders for the US Democratic Party presidential nomination.

Clinton is the right of centre establishment candidate, ex-Secretary of State and wife of former president, controversial Bill.

Sanders, elected to the US Senate as a populist “democratic socialist” independent but who, as a lawmaker, has largely voted with the Democrats.  Now he wants the backing of the party to represent it in the White House.

News outlets have compared Sanders to left-winger Jeremy Corbyn, whose grassroots popularity gave him his British Labour leadership victory last year. At the time, the liberal Guardian backed Corbyn's centrist rival Yvette Cooper, pretty much because she is a woman the same as the paper’s editor.

Now it’s doing the same with Hillary Clinton, which, judging by comments on a Guardian piece about a Sanders rally in his native Brooklyn, New York, is biased against Sanders. The Guardian stated 24,000 people were in the park for the mass event, while the  police said the figure was 50,000 in the park and surrounding areas.

The perceived bias made the paper hugely unpopular with its readers in their comments under the piece.

KenHubert wrote: “I turned off at 'rabble-rousing'. There's a great line from [the] Pope that tells it how it is with the Guardian these days when covering Sanders, Corbyn et al. "Damn with faint praise, assent with sullen leer, and without sneering, teach the rest to sneer." 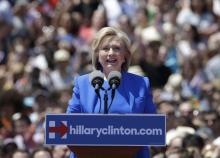 "with “Bernie” stickers on their cheeks"

While Falanx fumed: “Enough...The Guardian has consistently been pulling rhetorical dirty tricks on behalf of Hillary Clinton. The establishment Democrat Party is losing its electoral base; the established press is going to lose its readership. Enough of cheap shots. Your "tone" is not acceptable.” 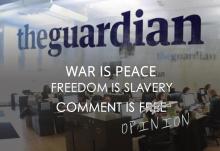 “As far as New York is concerned I think last night's rally will give Sander's [sic] campaign the momentum to close the gap although I don't think he'll attract enough minority voters to win.”

“Steve Inskeep wisely noted: “The Guardian recently ran an article about its approach to comments. It was very respectful and also emphasised the impact that comments have on journalists and writers, who are unhappy when rudely criticised. It also emphasised that Guardian staff is  [sic] "listening".

“But I read comments day after day in here, many of them quite substantial and supported, objecting to the careless (or possibly quite deliberate) language used to describe Bernie events, the thinly disguised spin, the lack of equal coverage and so on.”

“I've actually defended the Guardian when Bernie supporters below the line seemed to be nitpicking or over the top or just paranoid, and to vicious, unfounded assaults on Hillary that blur the substantial ones. But reader's [sic] objections are more than valid, and the coverage of this rally is very much a case in point.”

“As I mentioned in my comment below, journalists choose from a thousand details which are significant, they choose the language and tone and emphasis to describe any event, and they choose what to cover and what to bury.”

“It's apparent that the Guardian has decided to treat the hundreds of commenters [sic] here who object to what really is obvious spin as they treat the Bernie supporters they describe in their articles, and Bernie himself - as somewhat irrelevant, over-excited, naive kids with a kind of faintly admirable but inherently doomed retro message.”

“I'm disappointed - how is it that the Guardian, which has been steward of all sorts of breaking news involving obscene corruption in high places, fails to see the nose in front of its face? Or to respond respectfully to a consistent flood of comments?”

He added: “Because it is the Guardian: the Guardian of the established moneyed elite. The GUARDIAN of an unacceptable status quo.”

“I spent some time researching Guardian's funding. There's no Rupert [Murdoch] behind the scenes pulling strings so far as I can see. And in much of their reporting, they are very far from being protective of the moneyed elite, at least re US issues. So that's just shouting a slogan. But their obvious support of Hillary is really disappointing.”

Responding, jonber hlmorin bravely mentioned the Republican elephant in the room: “I hope you’re right. But, unfortunately, there’s no evidence to disprove the notion that most Americans, are politically ignorant and or apathetic.”

“Even worse: Millions of Americans believe that the moronic-bully, Donald Trump, cares about anything but himself and is fit to lead planet Earth…”

Emm Vee jonber suggested: “If you haven't already done so, please take the Bernie or bust pledge and join the movement! Basically, the pledge states if Bernie Sanders is not the democratic nominee, you agree to write in Bernie's name or vote for the Green Party candidate. Please copy and paste this on your Facebook and Twitter. Thank you.”

Furdoch said: “My suspicion is that the Guardian writers are not as tightly controlled as say Murdoch's reporters, but they understand very clearly that indicating support for Sanders could seriously harm their future job prospects and slant their articles accordingly.”

Suggesting the Guardian was guilty of hypocrisy, Virginia Fast commented: “I keep seeing your [the paper’s] subscription ads that mention independent journalism but when I read articles like this I wonder "independent of what ?" Can't you find more qualified journalists than these hackish flacks - or are they simply following orders?”

confettifoot replied: “I researched this one a while ago. Google 'Who Guards the Guardian?' in Prospect, check wiki and links within that article, google thoroughly. The Guardian isn't corruptly funded, there's no Murdoch pulling strings behind the curtains that I can discern. They have a tough time staying afloat, actually.”

“They're just biased for Hillary, and I'd love to know why.”

Joel Marcuson came to the Guardian’s rescue: “The discussions remind one of the sixties. Rally around the problems, never discuss the solutions. We are just not at a protest point. This is all very old and outdated stuff - like Bernie.”

But elaine hit back by saying: “Gee...what happened as a result of those protests in the 60s? Nothing? I seem to recall the end of a war, the Civil Rights Acts of 1964 and 1968, and the birth of the LGBT rights movement.”

“You may not be at a protest point, but millions of Americans are. And we do not think that the pursuit of civil rights and liberties, peace and justice are ever outdated.”

She found support from Will Morgan who said: “That's not the Sixties I remember. Sure people came together to rally, but they did discuss solutions, and by the seventies these solutions gave birth to the environmental movement, among others. That trend has continued to this day.

“The majority of people want to solve problems, but a small minority of the wealthy has a fix on power and has prevented all change for the last 40 years.”

One imagines, such is the power of Guardian readers the paper was forced to grudgingly run a glowing piece by Paul Mason headlined: “Only Bernie Sanders can break the power of capitalism in the US” days after the controversy, praising Sanders.

One surprised person commented he’d "never read such a good article in the Guardian all year.”