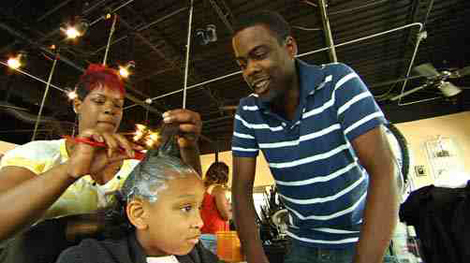 The festival at the BFI venue on London's arty Southbank opened with the award-winning documentary Good Hair - produced and narrated by US comedy star Chris Rock who attempts to answer his four-year-old daughter's dilemma: "How come I don't have good hair?"

By good hair she means long, straight and shiny hair as opposed to her natural curly African and apparently impossible to manage hair.

Rock embarks on a mission across hair salons all over America in an attempt to answer his daughter's question and find out why African-American women spend more than $9 billion a year on weaves, extensions and wigs chasing after "good hair".

A provocative documentary that will surely spark controversy with comments such as "It's (grooming) kinda like a torture session", "sex with a weave is a little awkward" or a scene where a women asks herself "so my nappy hair isn't worth anything?".

This celebration of Black cinema continues with titles such as Dennis Dortch's A Good Day to be Black and Sexy or Stascha Bader's study of Jamaican society and politics in Rocksteady: The Roots of Reggae.

Glory and tragedy of Kolkata

<p><strong>Nicole Valerie-Anne Sylvester<br></strong></p><p>1) To emulate the European women that are held up by society as the<br>pinnacle of beauty.<br><br>2) For social acceptance by their European counterparts... To "fit in".<br><br>3) For fashion purposes- keep up with Joneses.<br><br>4) To compete for the attention of Black men.<br><br>So many reasons, so little time! Sigh...</p>