All nations hold their flags dear and this is especially true in the case of Haiti. On May 18 1803, after some 12 years of fighting to gain their freedom from enslavement, the various African military leaders in France’s Saint Domingue colony in the Caribbean held a conference in Arcahaie, a city not far from the capital Port-au-Prince.

At that general meeting, they made two major decisions. The first was to ratify General Jean-Jacques Dessalines as their commander-in-chief. The second was to decide on a distinctive flag for the African forces, which hitherto actually carried the French tricolour to battle against French and all other forces who sought to keep them in chains.

Haitian history tells us that General Dessalines, whose parents had been brought to the island from Africa as slaves, solved the problem of a national flag in his typically pragmatic, yet highly symbolic fashion:  He tore out the white portion of the French tricolour, threw it away and had the blue and red portions sewn back together. 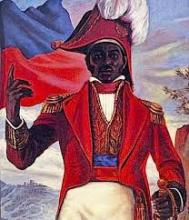 This is the flag that was carried to victory in the final battle of the Haitian Revolution in Vertierres, northern Haiti, six months later in November 1803. Haiti was the first Black nation to throw off its colonial shackles and win independence and the first in the world to be established after a successful slave rebellion.

The flag of Haiti has gone through a number of metamorphoses over our 210 years of independence. However, the current flag of Haiti is still imbued with the spirit of that first revolutionary flag. Every year on May 18, wherever they find themselves in the world, Haitians make it a point to celebrate Flag Day, if only by displaying their flag outside their home and remembering its significance.

This year, UHUK (United Haitians in the United Kingdom) are holding our third annual Flag Day commemoration on Saturday, May 17. We deliberately chose this date in order to maximise people’s ability to attend and minimise conflicts such as church attendance, which might have arisen were we to hold it on Sunday, May 18.

The venue for our celbration is St Georges’s Church Hall, St Georges, Campden Hill, Kensington, London W8 7JG. Nearest tube stations are Holland Park and Notting Hill Gate.  Festivities will start at 2.30pm and end  at 7pm. It is a free admission family event, comprising of activities for children and adults alike;

Haitian food, music and art on display; information about Haitian history, culture and more. Do come and celebrate this joyous day with us. We’re looking forward to welcoming you.

* Mario Gousse is a science teacher and education officer of UHUK.