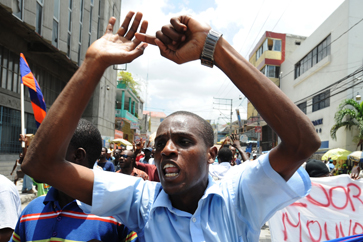 Protesters in Haiti have demanded the resignation of the country's president, accusing him of using January's devastating earthquake as an excuse to remain in power.

About 1,000 demonstrators took to the streets earlier this week to criticise Rene Preval after he said he would remain in power until next May if a presidential election is not held in November as scheduled.

Rene Preval's term is due to end in February, but officials have said a November ballot is in doubt because the 7.0-magnitude earthquake destroyed voting records and polling places.

The protest was called by nearly 40 political parties and other opposition groups.

As Monday's protest wound down, a quorum of the 29-member senate voted to extend Preval's term. The 99-seat lower chamber approved the measure last week.

The entire lower house and one-third of the senate are no longer sitting because the earthquake prevented February's legislative elections from taking place.

"Effectively the parliament is ceasing to exist as a governing body and the people on the streets are pretty concerned about that," Al Jazeera's Seb Walker, reporting from Port-au-Prince, said.

"It concentrates power in the hands of the president and the international commission that has been set up with former US president Bill Clinton as a co-chair.

"The people say that this means the day-to-day running of the country is now out of their hands."

The commission, which also includes Jean-Max Bellerive, the prime minister, is to oversee $9.9bn in foreign reconstruction money pledged at a March conference, a sum 40 per cent larger than Haiti's entire gross domestic product.

But many of the protesters said that Preval has sold the country to foreign powers, while the commission violates Haiti's sovereignty.

"Preval should leave power and he should be arrested," Maxime Geffrard, one of the demonstrators, shouted on Monday.

"He is a traitor because he wants to sell the country to foreigners."

Claudy Louis, a 29-year-old schoolteacher, said: "Preval has used the drama that our country went through and turned it into an opportunity for himself.

"Instead of looking out for the people, he quickly hatched a plan to benefit the small group of people around him, the bourgeoisie."

Tear gas was fired at the protesters as they attempted to break through a barrier outside the ruined presidential palace.

Small protests were also reported in other cities: the southern cities of Jacmel, Miragoane and Nippes, northwestern Gonaives and the northern port city of Cap-Haitien.

Haiti's government has come under strong criticism for its response to the January 12 earthquake that killed up to 300,000 people and caused damage estimated at up to 120 per cent of the impoverished Caribbean country's gross domestic product.

US lies, half truths and failures in Afghanistan