...But he does not cure the lame and crippled 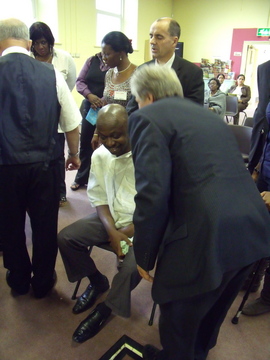 I thought I was going to witness an afternoon of amazing miracles.  But that is not what I saw.  Melvin Banks, the veteran international evangelist with a ministry in healing, was appearing at a church in Peckham, south London.

Leaflets distributed in the area boasted of Astonishing! Amazing healings of depression, fears, blood disorders, and skin diseases.  Sticks, crutches often discarded in Reverend Banks meetings.  Lives have been changed by the Power of God.  We were told that the lame and crippled had walked after prayers in these services.  One of the first things I noticed was that the photos of these “healed” people looked very dated; black and white images that would not be out of place in a 1960s newspaper.

At the church entrance arrivals were welcomed by Rev Banks's wife of 47 years, Lillian, who handed them a donation form. She said she had been doing services like this for “fifty-five years”.  I asked which other churches in London they would be visiting, as part of the much mooted crusade, but she wasn’t sure.  Lillian, originally from Cumberland on the English border with Scotland, was accompanied by two local Black women as greeters at the Peckham Park Baptist Church.

We entered a large carpeted room with grey plastic chairs.  I was handed a new international version bible and everyone was encouraged to greet their  neighbour.  So initially there was a lot of hand shaking and exchanging of brief pleasantries.

The congregation was Black African apart from Rev Banks, his wife and three other middle aged white men who sat in the front row.  The service started with some announcements made by the hosting church Pastor Rev Binney, a thin, thirty something, besuited Ghanaian with glasses.  He said, tantalisingly: “Expect a miracle this afternoon. We are a bible believing church; we believe in miracles, healing and the power to change lives.”

Before Rev Banks took to the stage, scriptures were read by his helpers Barry and John.  Sprightly Rev Banks bounded onto the stage and made his way to the pulpit - a short, grey haired man whose demeanor reminded me of Jimmy “Jim will Fix It” Saville.  He mentioned books that he had written that could be purchased that day at discounted prices.  There was a bonus free book, God is Great, on offer in return for the filling in of a form with name and address. All that was required was a donation of at least £4.99 to cover postage and packing.  Rev Banks said that one of his books had sold out in Harrods, though he craftily described the posh department store as the top Knightsbridge shop whose name begins with “H”.

Rev Banks began his sermon with a few jokes from the Daily Mail.  Gags such as “A clear conscience is usually a sign of a bad memory” and “Love may be blind but marriage is the real eye opener”, raised a few laughs.  He then announced: “Jesus runs the biggest take away – he takes away your nightmares and your sins.” He added: “We come here to give the devil a hard time.”

The congregation were invited to a free dinner. In order to attend they just needed to fill in their details on a white card that was being handed out.

Yellow prayer cards were given to people who wanted Rev Banks to pray something personal for them. Again, as part of the hard-sell marketing, there was a tear off portion for people to give their contact details.  After the collecting of these cards, Brother Barry read a Salvation Prayer for everyone to follow.  He told the congregation that many evangelists wouldn’t come to a small church but Brother Melvin did.

People were urged numerous times to give generously.  Cheques could be made payable to Revival Healing, the name of Rev Banks's organisation, or "a fiver or more" could be sent in an envelope. Again people were reminded to put names and addresses on the front of the envelopes containing their offerings.

Finally, the moment that I had been anticipating had arrived when the call for The Healing line was requested.  People with pain, sticks and in wheelchairs were encouraged to come to the front of the stage to receive their special prayers.

Anthony Ukueku, a 79-year-old retired surgical equipment salesman from Lewisham, had Parkinson tremors in his right arm that started three years ago.  Speaking to him after his “healing”, he told me: “I came here yesterday for prayers and again today but there is no improvement. I am still shaking.” Asked how he felt about this, he replied: “It shows prayers are not effective yet, unless it will happen gradually. From the leaflet I thought it would be immediate. It had said that they could cure Parkinson’s disease." A pensioner, he had donated £5 on Saturday and £2 on Sunday. He left before the service finished as there was nothing more that could be done for him.

Colin Ogundipe, used a walking stick, helped along  by his daughter Bidemi, a nurse. He had suffered a stroke and had been unable to speak for a year. Despairing, Bidemi had brought him to the service. He continually wiped away the saliva that was dripping from his mouth.

Colin sat in his seat while Rev Banks and his assistants laid hands on him and prayed. He was repeatedly asked to move his legs and to say his name. "Come on Colin you can do it. Try harder. Stretch out your leg. I can see you are man full of faith. A happy man. Is he a happy man?" Rev Banks asked of Colin's daughter, to whom he referred, in complimentary terms, on several occasions. She nodded her head enthusiastically.  I witnessed some movement of his feet and he was then helped to get up and walk around the room. Had he been unaided then this may have well constituted a miracle.  He was asked to say his name but no amount of requests made him able to do this.

After her healing prayers Grace John, jumped up and down to illustrate she was pain free. She had taken a fall in 2003 hurting her hip.  She wouldn’t disclose the amount of money that she had donated, but did say: “I gave what I could afford”.