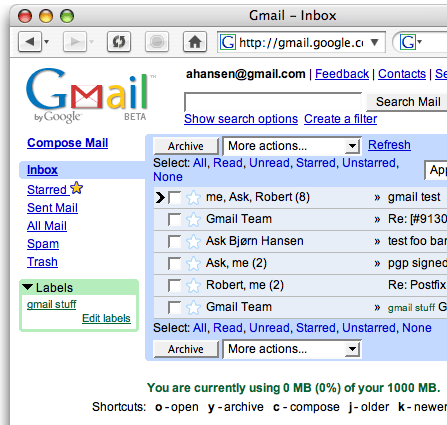 In Google's war with social networking giant Facebook, its "don't be evil" motto could be a casualty.

The search engine is now leveraging your private Gmail information to get an edge in the social networking wars. It's creepy.

Google is quietly mining your Gmail contacts database to figure out which competing social networks you belong to. When it discovers one, it "suggests" that you vacuum the outside account into your Google account so that Google can exploit the data within its own services. The practice of monitoring users' email address books to better compete with Facebook appears to be the furthest - and most arguably "evil" - step Google has yet taken with Gmail or indeed with any sensitive personal information with which it is entrusted.

It's also that kind of thing that scares the hell out of users. Gmail was already controversial back when all it did was automatically scan your email for keywords for targeting anonymous advertisements.

The Business Insider website discovered evidence of the data harvesting in the form of an obscure checkbox on a buried Google account preferences pane, which reads, "use my Google contact information to suggest accounts from other sites." By default, this box is checked, which means Google has been scanning your Gmail contacts, unless by some miracle you found this option, buried several clicks beyond your Gmail inbox, and disabled it. Business Insider wonders if Google might be scanning Gmail inboxes, looking for confirmation emails from various social networks.

According to a Google "help" document, that's not the case. But the behaviour Google does publicly admit to is still disturbing; the company says it looks for "similarities between your connections" in your Gmail address book and in social networking accounts that Google thinks might belong to you. "For example," said the Google page, "Bob's Google Contacts have names that are very similar to the names of people he follows publicly on Twitter."

Bob's Google contacts are also private information. And they don't just include people Bob has expressly added as contacts; Gmail address books are automatically populated with "the 20 addresses you use most frequently."

Once Google finds a social networking account that might belong to you, it offers to "connect" the account to your Google account, saying the connection will help personalize and improve your Google search results, will make it easier for friends "to find the stuff you share on the web," and will optionally leave you with a Google profile that shows all your other accounts and ranks high in Google search results.

In other words, by combing through your Gmail contacts, Google makes it more likely you will participate in its own efforts to compete more effectively with its archrival Facebook. "They are doing this to assemble another copy of [your social] graph by scraping other sources, rather than making their own," a source told Business Insider.

In other words, Google is taking the intimate personal data in your Gmail account, using it to spy more effectively on you, and also using it for its own (hoped for) gain. That sounds pretty evil. Although the company doubtless has a canned response for why it took this step without asking permission first. Let us guess: To make Google even more awesome for us, the users. How sweet.

You can turn off contact spying by going to your Gmail account; clicking on your email address in the upper right corner of the screen; selecting "Account Settings" from the drop down menu; and then selecting "Connected accounts: View and manage your accounts from other services." Or you can try clicking here. The checkbox is at the bottom of the page.

Google sent us a statement saying "we won't reveal your private connections to other users without your permission." They'll access them, and use them to find your other social media accounts, but they won't publish anything without your say so. Yet.

*Ryan Tate is a coumnist with US website Gawker.com.

Indians say 'we've never had it so bad'