Publicity leading up to Black Panther was epic. Social media went into a frenzy. Every other post that I saw was about the film. People, predominantly Black ones, were more than excited for this majority Black casted movie to be released. But was this that serious? I mean it’s a fictional film. People were acting as though something extraordinary was emerging that would overnight propel Black people into a better position in society.

To me, the effect of the Black Panther wasn’t that transformative. But to others the film seemed revolutionary. I feel like this shows just how important representation is. People admire media figures so much that when you don’t see yourself in newspapers, broadcast output or film it can cause racial insecurities.

So, after being told that it was a “sick” film by a friend, I decided to go and see if Black Panther was worth it.  (“Sick” is youth parlance for something really good.) 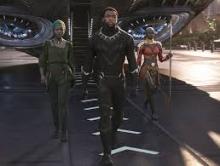 Set in a futuristic, technology advanced country in Africa named Wakanda, the special effects, stunts and tricks were phenomenal. Wakanda shows how progressive African countries would be had they not been damaged by colonialism and the slave trade. Obviously without the flying saucers and other unrealistic stuff. That was just for the movie.

The people of Wakanda were culturally rich and there wasn’t a weave in sight. Apart from one clip where it was labelled as a “disgrace”.  Sorry guys, only natural African beauty allowed in this place.

Moreover, some of the characters' fashion styles were based on the culture of different tribes that exist in Africa. This was meaningful as it showed the diversity of customs throughout the continent.

Furthermore, many scenes were used metaphorically. For example, the part where Michael B. Jordan’s character Killmonger stated that ornaments in the museum had been stolen from his ancestors: this signified how Africa has been exploited and put on display for European entertainment and benefit.

Additionally, the use of vibranium, a fictional metal with super properties only available in Wakanda, showcased that Africa, materially, is the richest place on earth, and the world hugely depends on the continent for its natural resources. One only has to think of coltan, the metal that makes mobile phones work, which is mined in central Africa.

Unexpected jokes in the film, such as referring to a white character as a “coloniser”, may have felt uncomfortable for some. The writers Ryan Coogler and Joe Robert Cole were aware of this and added these statements regardless of who they offended. It was a truth boldly expressed.

What did it for me though were the women. Fierce and powerful they symbolised strength. This went against stereotypes of not just women but Black women. They were not aggressive, loud or angry but instead loyal, mighty warriors that Black Panther and Wakanda would be nothing without.

Furthermore, this film portrayed two types of Black people that are present in society. Killmonger represented the ones who are angry at the injustices of the past and present, seek to get justice and help other Black people.

Black Panther demonstrated the ones who do well and look out for themselves. The latter is often condemned by the former for being a "sell out" and not supporting their own. This was heavily shown in the film by the conflict between these two characters. Some relate to Killmonger’s pain but want equality rather than revenge.

I am concerned his character was purposely made to be the villain to exaggerate a point that those people who are for Black empowerment are somehow threateningly radical.

What’s more, the ending was a little bizarre. It was Black Panther offering to share vibranium with other countries despite being told that he should help the diaspora first because Black people had been disadvantaged throughout the world and therefore needed it most.

Why would a country give up its most valued resource to just anyone? Would other nations have done that for Wakanda? But, realistically, Hollywood would not make a film where the Killmonger character was successful. They are not that commercially stupid. They know the power of the white-dominated news media and pander to it – even with Black Panther.

A parody of banking crisis that absolves the culprits

Scratching the surface of Canada's inhumane past