How mobile phones can make world a better place 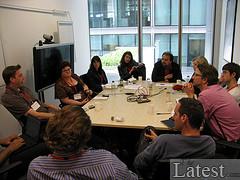 Geeks, charity workers, citizen journalists, a futurist and other people interested in working together using new technology for the common good met at a "social change camp" in London on Saturday hosted by a top mobile phone operator.

The brand new Vodafone blue glass skyscraper building at the Paddington Central commercial complex set the Ã¼ber modern scene for the unscripted get together - the topics covered by "break out" workshops were decided by the more than 60 participants themselves on the day. 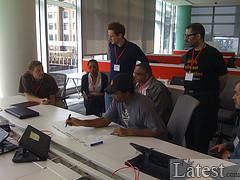 Previous sessions have been held throughout the world, including several in America, with more planned for Canada, Kenya, South Africa and Israel.

As an ice breaker, American futurist Scott Smith had dreamed up a card game. We split up into six groups, each tasked with solving an internet-based "social issue" problem in an hour. My group morphed into an international development fund putting money behind "hardcore activists" in rural India determined to financially support a women's rights project being closely monitored by the government. 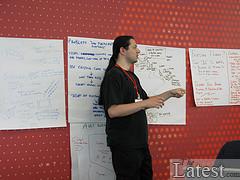 We first decided that tactically we should invite the Indian government to partner us, eventhough encoded mobile technology would be used to keep our project targets safe. Health, education, money and work were identified as the areas where we could most make a difference using a micro-finance system to dispense funds. A method to track delivery and success would be developed for use by the development fund and its beneficiaries.

I went to a morning and afternoon break out session. The first was led by brave Israeli video director Oren Yakobovich who documents, through "crowd sourced" film, human rights abuses in the occupied Palestinian territories of Gaza and the West Bank. Yakobovich used video clips to help give a gripping account of attacks on Palestinians by Israeli settlers and military. 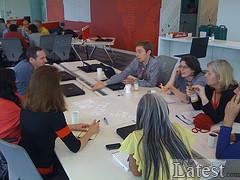 But he was not left unchallenged by the workshop participants. One of them, a former British diplomat, said such footage could incite hatred towards Jewish people by "fanning the flames" and that positive stories about Palestinians and Isrealis living together in harmony should also be featured. Other people raised questions about the authenticity of video clips in the propaganda war of conflicts like the one in the Middle East.

Vodafone's Daniel K. Appelquist, senior technology strategist for the firm, took my second session. With the help of our sparky rapporteur Nicky Hickman, a historian turned marketing and innovation manager, we came up with a "mind mapped" plan to promote social action micro-blogging and citizen journalism. Software like the Kenyan-developed Ushahidi that allows text messages from conflict zones to be aggregated were mentioned as a good model to use. Also discussed were the virtues and challenges encountered by platforms including Twitter and Identica (micro-blogging) and The-Latest.Com (citizen journalism). 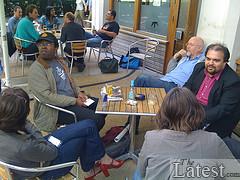 At the end of a nourishing day (deluxe sandwiches from Pret A Manger) - punctuated by an irritating fire drill announcement over the public address system repeated for almost an hour - I finally discovered why these gatherings are called "bar camps". Everyone who had lasted indoors until the end of the hot Bank Holiday summer's day was treated to a round of free drinks from the organisers at the pretty Regent's canal-side Union pub. This is where the alcohol-fuelled social networking began in earnest.