How our heroine was axed from show by biased WAG 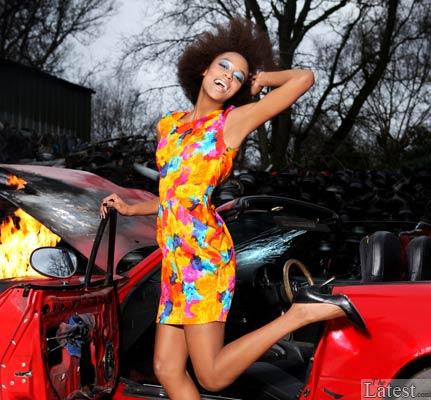 Sorry folks. Our own Annaliese Dayes, pictured left, was eliminated from Britain's Next Top Model reality Tv show on Monday night after a thrilling eight week run during which she has provided The-Latest with her insightful behind the scenes weekly blogs. And the one who wielded the hatchet was guest judge and "red top" tabloid newspaper favourite Abbey Clancy.

The blonde model's claim to fame is that she is England footballer Peter Crouch's partner and therefore a member of the Wives and Girlfriends (WAG) celebrity club. She was   a previous Britain's Next Top Model   runner up. Abbey stitched up Annaliese, 22, who has just completed a media studies and broadcast degree at London's prestigious University of Westminster. Tv watchers have predicted that Annaliese, who lives at Camden, in north London, is destined to follow in June Sarpong's footsteps as hot property.

Annaliese was tricked off Britain's Next Top Model on Living TV after reaching the last seven contestants. Here she tells The-Latest what happened in her own words:

"It was no secret that Chloe (Cummings) and I didn't get along. She had left the competition two weeks before her WAG cousin was a guest judge. In that time Chloe had told Abbey that we didn't get along. Abbey was then at our photo shoot before the judging part of the show. She made it known that she knew about Chloe and I having differences, by mentioning it to the hair and makeup artists and even to other contestants.

While I was on set getting my photos taken she was there giving "advice" and she suggested that, in keeping with the type of dress I was wearing, it would be best if I smiled and looked cute and jumped around. I did this and I thought it was all good.

But afterwards, at judging stage when my photo came up, she switched on me by saying that I shouldn't have been smiling and laughing as it was an edgy shoot. I should add that I did edgy poses to start with. Abbey then accused me of being arrogant and completely hid the fact, from the other judges, that she had directed me to look the way she was now criticising at the photo shoot.

From when I first met Abbey I kept saying to myself that I just didn't trust the impartiality of this woman and her bitchy, biased judging proved me right. I'm not saying this was the only reason I was eliminated from the show but it was definitely a contributing factor.

To confirm her bias towards any of us girls who had fallen out with Chloe, there's also the fact that she was aware that Sophie (Sumner), another contestant, also didn't get along with her cousin and Abbey also turned against her in judging, resulting in Sophie being in the bottom two with me."

Top photographer Huggy Ragnarsson, one of the judges, was so moved when Annaliese was eliminated she wiped a tear from her eye.

Another panel member Louis Mariette enthused: "As a professional Annaliese gives 100 per cent - her work ethos - and that is so very important."

The show's presenter Lisa Snowdon told her: "We love your enthusiasm. You've shown us that you can nail a commercial shot. You are an angel. You go forth and do what you want to do because you have what it takes to succeed."

Annaliese, who wants to be a music or entertainments television presenter, has also won praise from people who matter in broadcasting which suggests she has a bright future ahead. Rob Kirk, Editorial Development manager at Sky News, said to her : "You are clearly a vivacious person and you've packed a lot into your career. I congratulate you on what you've achieved so far and I really wish you well."