Them, an online publication, reported April 22 that four gay men had been murdered in South Africa in less than a month. The disturbing report made national headlines after a local government official, the spokesperson for the Gauteng Department of Cooperative Governance and Traditional Affairs, Castro Ngobese, shared a link to the story on Twitter alongside a fist emoji and the caption “Aluta Continua” (the struggle continues). 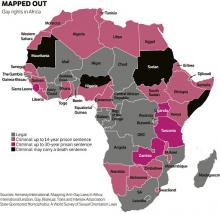 Ngobese’s tweet received nationwide attention not only because it revealed a government official’s unapologetic homophobia, but also because it was emblematic of the widespread and stubborn resistance to the establishment of LGBTQ rights in South Africa.

South Africa’s constitution prohibits unfair discrimination on the grounds of sexual orientation and guarantees equality for gay and lesbian people. Same-sex marriages are legal and transgender people can change their sex description and gender marker in the national birth register. Nevertheless, the LGBTQI community has long been subjected to hate speech, discrimination, and grotesque violence in the country. Moreover, many South Africans still perceive LGBTQ individuals as inherently immoral and “un-African”, and thus pay little attention to the abuse they endure on a daily basis in the country.

It is time for South Africa to respond decisively to this growing problem by adopting preventive measures against homophobic hate speech and hate crimes.

The Gay and Lesbian Alliance of South Africa has urged the parliament to pass a proposed hate crimes law. The Prevention and Combating of Hate Crimes and Hate Speech Bill 2018 aims to outlaw hate crimes and hate speech on grounds of race, gender identity and sexual orientation, among others. The bill’s ratification has been delayed due to concerns that it may inhibit freedom of speech.

It must also use every single tool at its service to raise awareness about LGBTQI rights at home and abroad, as this persecuted community’s most fundamental human rights are under threat not only in South Africa but across the continent.

Indeed, in many African countries, colonial anti-LGBTQ laws and attitudes are still in full force, and LGBTQI individuals continue to be routinely targeted by government authorities, religious groups and those who claim to be fighting to preserve “traditional values”.

In Uganda, where LGBTQI people face widespread persecution, President Yoweri Museveni claimed that the protests against his 35-year rule were funded by “foreign homosexuals” in January.

In Cameroon, security forces have arbitrarily arrested, beaten, or threatened at least 24 people for alleged consensual same-sex conduct or gender nonconformity since February 2021.

In Ghana, church groups, politicians and anti-gay rights organisations held demonstrations against the opening of Ghana’s first LGBTQ community centre in February. Predictably the protests and condemnation led to the abrupt closure of the community centre founded by LGBT+ Rights Ghana.

The endless stigmatisation of homosexuals and the presentation of unfounded links between LGBTQI communities and public health or socioeconomic crises are deplorable and inhumane. The persistent and unjust framing of LGBTQ individuals as threats to a society’s wellbeing serves only to hide the discrimination and persecution they suffer at the hands of those very same societies.

LGBTQI people, especially HIV-positive men, struggle to access adequate healthcare in, among others, South Africa, Tanzania, Kenya, Egypt, Cameroon and Uganda. This unfair and unethical restriction not only puts LGBTQ lives at risk, but also hinders the global fight against HIV.

In South Africa, for instance, the monthly earnings of gender nonconforming, gay or bisexual men are, on average, 30 percent lower than that of gender conforming heterosexual men. Worse still, LGBTQ people also suffer from higher rates of suicide, rape and violence.

Despite these extensive impediments, the African Union has steered clear of providing strong leadership on this longstanding and largely unresolved human rights matter.

This is why the ANC government, which takes pride in its support for human rights at home and abroad, has a responsibility to assume the leadership position on this issue and help facilitate positive change in South Africa and beyond.

LGBTQI Africans deserve to enjoy the rights and freedoms enshrined in the African Charter on Human Rights just like cisgender heterosexual Africans.

While Ngobese is just one person who tweeted a hateful opinion in his personal capacity, he represents so many in South Africa and across the continent who are determined to deny LGBTQ Africans the most fundamental human rights. The South African government should take action without delay to ensure Ngobese and others like him do not define what Africa and Africans stand for.

Why pride in being African is important to students