Right-wing commentators are trying to damp down growing protest movements against US President Donald Trump by saying it’s a waste of time. David Cameron’s former speechwriter Clare Foges writes in the Sun that protests are “pointless” and “won’t make the slightest difference.”

In the US, neocon David Frum advises: “Your demonstrations are engineered to fail. They didn’t stop the Iraq war. They won’t stop Donald Trump.”

Are they right - must protest fail?

There’s a big answer to this big question - not only can protest movements work, they shaped the world we live in. The vote, the welfare state, women’s rights, they only exist because of powerful social movements.

There’s an immediate small answer: British protests already look like they will stop Trump addressing Parliament. US protests have spurred a legal challenge to Trump which allowed some migrants to get round his “Muslim ban.” These are small, but real victories.

As this perpetual question resurfaced, I also thought of older answers. Throughout my life I’ve seen protest work -not always perfectly, not always quickly — but the protest movement that makes “no difference” is rare.

These are movements from the late 1980s and early 1990s in which I was a footsoldier, or sometimes a corporal. These were not “good old days.” Many of these movements happened under Thatcher’s government. The broad sweep of politics was rightwards. The “forward march of labour was halted.” The miners had been defeated, Maggie was strong.

But still, change happened, showing me how the world can be changed from below.

If it were not for protest, you’d all be paying the Poll Tax now. And likely other “flat taxes” that charge the duke and the dustman the same would be a reality, not a fringe right-wing dream. 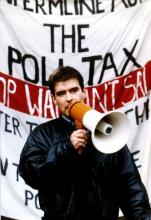 The movement against the Poll Tax was a totally grassroots affair, opposed by the Labour Party leadership, ignored by trade union leaders and led by a motley crew of far-left groups like the Militant Tendency and Socialist Workers Party and a variety of anarchists.

Looking back it might look easy - hugely unpopular policy, big riot, end of story. But the movement involved a year of community organising from 1989 on, getting people to fight registration for the tax, its collection, rate setting and resisting prosecution of those avoiding the tax on a council-by-council, street by street basis.

The movement was regularly denounced as lawbreaking, violent and mad by mainstream politicians,  both Labour and Tory and the press. But it won by sometimes gritty, sometimes imaginative organisation at street level.

By contrast, the anti-apartheid movement (AAM) was supported by the Labour and trade union leadership. Respected on the left, AAM was vigorously opposed by the right. The AAM supported the African National Congress, who were denounced as “terrorist” by the Conservatives.

The Tory press did their best to join in attacking and ridiculing AAM. But they failed, so the AAM shows how a British social movement can play a key role in international affairs.

Ultimately, the South African people ended apartheid by years of struggle in the townships, mines and factories. But British support helped them sustain their struggle and, by chipping at the support from the British government, weakened the resolve of the apartheid regime. The British anti-apartheid movement was incredibly broad, but also deep. It helped win big political battles - the marches, the streets and buildings named after Nelson Mandela, the meetings - which kept the cause alive. The movement also organised specific, practical support for South African exiles, who were a big part of the battle against apartheid. 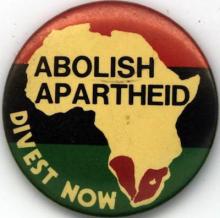 There are always small wins before the final victory, individual South African prisoners who were released or had their prison conditions improved thanks to the campaign. There were also many, many smaller campaigns.

Some of the toughest fights were the “justice” campaigns. In 1991 I had a small involvement in the Cardiff Three campaign. In 1988 Lynette White was savagely murdered in Cardiff while working as a prostitute. The police initially searched for a dark haired white man seen leaving the scene. But they then arrested three black and mixed race men, railroading them into jail for the killing.

The “Cardiff Three” campaign helped get them freed on appeal in 1992. Their final release involved hard work by lawyers and investigative journalists in the national media. But none of that would have happened without the core of the campaign, family and friends of the “boys,” political activists, grassroots researchers all helped fund the campaign, generate publicity, pick apart the evidence, uncovering the hidden witnesses and crude “fit ups” by the police.

Like all the “justice” campaigns of that time - the Guildford Four, Birmingham Six, Tottenham Three -the campaigners had to work hard in the face of deep hostility before they began to win over support.

The Conservative press viewed these people as murderous bombers, or wild rioters who had hacked to death a police officer, or crazed women killers. Even the Guardian, which was generally very good on “justice” campaigns, published a 4,000 word piece condemning the Cardiff Three as killers just as their fight was going mainstream.

So winning support for the campaigns was tough. But the men and women were freed from jail, the fit-ups exposed, police procedures changed. The campaigns also stopped any attempt to reintroduce capital punishment, as all of the freed prisoners would surely have been hanged.

No victory is perfect. Despite repeated attempts, no police officers were prosecuted for misconduct in the fit-up. For years, the police refused to reinvestigate Lynette White’s killing and claimed the Cardiff Three were released on a “technicality.” Only when a new investigating officer took charge was White’s real killer, Jeffrey Gafoor, who presents as a dark haired white man, discovered and imprisoned in 2003. But the campaign, like all the justice campaigns, showed that a dogged, grassroots struggle, in the face of a hostile press, is stronger than prison bars.

These were early lessons.  You can’t always get what you want through protest. But you can always get some of what you need. It’s good to get “big name” supporters, but being based in the grassroots means more.

Prepare for a longer haul. You need passion, but you need organisation too. You often have to fight past the hostility of the press and political parties. You might deal with infighting in your own ranks. But the only way to guarantee getting nothing is doing nothing.

Protestors in Venezuela and Ukraine organise through Zello app