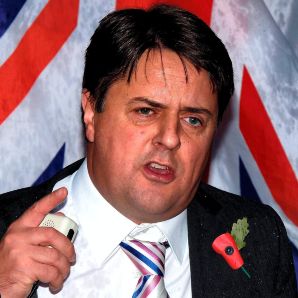 I trawled the internet today, reading the numerous articles, blogs and comments written in the aftermath of the pantomime-like edition of the British Broadcasting Corporation’s Question Time programme which featured its “star” guest, British National Party leader Nick Griffin, pictured left. On this occasion my visit around the web proved quite a sobering experience and one in which leading politicians in the UK would do well to follow.

While racist, homophobic Griffin bleats on about his unfair treatment at the hands of the “ultra-leftist” BBC (laughable), readers comments on these websites give a good but worrying barometer of the real views of large sections of the British public on the issues of race, immigration and BNP representation. 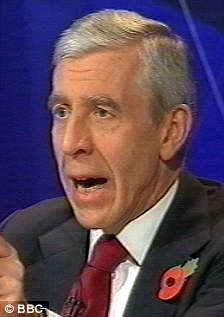 For me, the Question Time format was highly inappropriate for giving Griffin MEP the grilling he deserved. In the unlikely event that the BBC’s invitation to the BNP leader was some sort of honest but veiled attempt to expose the nasty nature of the man and his party, they failed miserably.

The token opportunity provided by the programme’s set-up for penetrative questioning and interrogation of Griffin by his fellow panellists about previous vile public statements and BNP policies was squandered and replaced by rowdy, childish “let’s get the bogeyman” one-upmanship.

“I’m not a member of the BNP but…” prefaced many readers comments on the internet. The authors of some of the opinions expressed have not only been sold on the idea of Griffin as a “victim” of political correctness and the abusive power of the “political elite” after his appearance on Question Time, they also have latent prejudices similar to Griffin’s and are desperate for someone vaguely credible who can articulate and give life to their misguided views on the national and international political stage.

My concern with all that I’ve witnessed so far is that Griffin, an artful deceiver, will now travel the road of other miscreants and dishonestly try to redeem himself in the eyes of the public for his past misdemeanours which have been well documented. It started last night.  When asked by Question Time chair David Dimbleby about previous remarks he said: "I can't explain why I used to say those things".

He acknowledged the BNP had been a “racist and anti-Semitic organisation” but claimed it had changed under his leadership. He added: “I am not a Nazi and never have been”.

However, Griffin’s clumsy, televised attempt at a political “makeover” of the BNP has been met with bitter resistance by rabid members of the party’s hierarchy and other far-right groups.

Lee Barnes, the BNP's legal officer, accused Griffin of “failing to press the attack" during the Question Time debate. Barnes used his personal website to suggest that "perhaps there needs to be a few 'white riots' around the country a la the Brixton riots of the 1980s before the idiot white liberal middle class and their ethnic middle-class fellow travellers wake up”.

Others sympathetic to the BNP's views expressed dismay at Griffin's flustered attempts to appeal to the mainstream.

In the Stormfront online forum, a BNP sympathiser said: "I'm starting to think this appealing to the mainstream approach is the wrong direction. I would rather have seen George Lincoln Rockwell (founder of the American Nazi party) on the panel, there would have been a riot."

Will Griffin learn lessons from his inept performance on Question Time? Can he fine-tune his presentation and charter of hate to reinvent himself and his party of hardcore racists as an alternative third force in British politics?

I’m reminded of a passage in playwright William Shakespeare’s Macbeth and would rather believe that Griffin is that “poor player that struts and frets in his hour upon the stage and is heard of no more”.

And that this BBC episode of Question Time  was “a tale told by an idiot, full of sound and fury, signifying nothing”.

This is a comment from Jon, a Times Online reader from London:

"I'm a white British person, born and raised in South London. I'm not a BNP supporter but neither am I fan of any major political party - I voted Libertas in the EU elections, actually! The seeming 'rise' of the BNP alarms me, especially considering just how unfit for political purpose they are.

Here's the thing about the BNP: they claim to be a proper political party, who have aspirations to govern and 'save Britain'. But can anyone actually outline a single one of their policies apart from immigration? They can't be taken seriously because they don't take politics seriously. They use 'fear politics', preying on the public's concerns and riding populist bandwagons rather than actually outlining their own plans. They're all sound bites and catchphrases, deliberately provocative slogans and symbols. They try to portray themselves as the party of the people, the ones who can 'save Britain', but in fact if they came to power tomorrow they'd have no idea where to even start.

It's all very well to say 'Britain is being invaded, we need to change'. They're just words. How, Mr. Griffin? How will we change? What's your policy on climate change, education, the economy? Here's a few policies from their website: a reintroduction of corporal punishment into schools, an end to all foreign aid, the use of 'chain-gangs' of prisoners for community projects, withdrawal from NATO and the EU, abolition of the Human Rights Act, exclusion of foreign-made goods from British markets, 'trade with the rest of the world as it suits us'.

Their policies would isolate Britain from the rest of the world, turning us into an internationally reviled little island off mainland Europe with no allies or political clout on the world stage. We live in an age of globalisation, Mr. Griffin. You want to reset Britain back to 1945 - unless you've beaten the world's scientists and invented a time machine, that won't work. The world's moved on, and we can't just detach ourselves from it. London's tourism industry alone is worth £8 billion a year - does Nick Griffin think that'll continue if the BNP is in power? All foreign businesses would up and leave. Trading links around the world would be severed. We'd drift into the kind of isolationist hell the people of North Korea are currently experiencing. Does that sound like change for the better?

If everyone stopped thinking about immigration for just one moment, then the real ridiculousness of the BNP would be exposed. It's right the BBC let Nick Griffin appear, but I'm really disappointed that Question Time didn't take the opportunity to look at some of these other issues. Instead, they talked about exactly what the BNP want to talk about: immigration, immigration, immigration.

That's the one issue they seem to be able to engage people on. Yes, Griffin looked like a fool (although part of me thought that ANYONE would react similarly uncomfortably when up against that kind of reception), but he was made to look like a victim. What would REALLY have exposed him would have been if the debate had focused on other issues, questions to which the BNP have absolutely no answers. They missed a trick, and the BNP have probably actually come out looking better for their appearance. Which, as I said at the beginning of this post, fills me with dismay. I have a horrible feeling they're going to do rather well at the next general election - I hope to God I'm wrong".

Here are a few more comments from Mail online readers.

"We are sick to the death of this; let us decide who we want to listen to. These people are trying to stop free speech because it does not run with their agenda - how dare they! We never hear another point of view in politics, and maybe they are afraid we will agree with Nick Griffin. Whether you agree with him or not, he has every right, as an elected politician, to speak out on what the average person is worried about. We have no say about the EU or this country, we are just told what we should believe in and what we should do - we are reduced to sheep. I am glad someone is brave enough to throw a spanner in the works."

Jack from the Yorkshire region said:

"Hang on a minute......
I am no British National Party supporter but that "anti" advert alleging they would smash Democracy?  Since when have the religion of peace ever promoted Democracy?

Which direction have people been looking when England's Democracy has been abolished by ZanuLiebour? Seen some of the smaller print in the "Lisbon Treaty?

There is not a jot of difference they are all self serving schemers".

I can’t help thinking that Nick Griffin will be walking into a very well crafted trap, designed to lead the conversation into well worn paths so he can be humiliated and vilified....No doubt the other great and good guests have been carefully chosen...the audience vetted to be extremely hostile....the panel dummies wearing ear pieces linked to " Special" advisers so they can at least look intelligent and spontaneous....And outside?...the usual rent-a-mob riffraff.....Communism killed more people than National Socialism ever did...It was uber racist too, deliberately targeting Ukraine to starve to death...Yet here we are...soon to be fully paid up unwilling members of a soon to be Communist Super state...

Nick Griffin looked uncomfortable to say the least, at times he looked scared stiff, although he said he was prepared for a tough time, it didnt look as though he prepared enough.

The programme was a mixed blessing, figures show an enormous interest in the BNP, when Griffin did get a word in, he made good sense. The others particularly Straw and the muslim were a disgrace to democracy and fair play. Bonnie Greer was particularly rude and showed herself to be a bigot, taking advantage of the British legendary tolerance. Overall despite the howling down, A GOOD NIGHT for patriotism and my country.