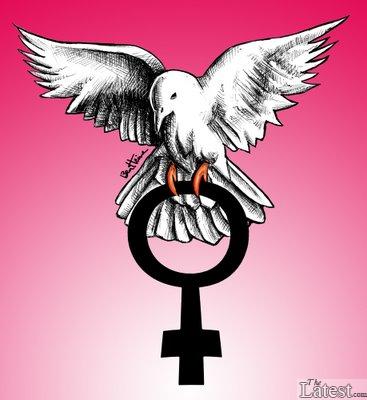 Women's achievements in the world have been honoured globally this month with colourful celebrations. We are only two years away from the International Women's Day centenary. It was first proposed in Copenhagen in 1910.

In the official IWD Web site, 52 countries list their month-long events that include tributes to women achievers from all sectors of society. It is an occasion that foregrounds influential and memorable women characters - real, legendary or mythical-which had shaped other women's lives.

In fact, the more recent celebration of IWD has transformed it into a more cultural one by combining it with existing local events inspired by women's role such as Mother's Day or even Valentine's Day.

But, more importantly, the event has served as a crucial reminder of the common disadvantages women from various parts of the globe experience due to an essentialist gender belief. Its call has encouraged a sisterhood that bind women of different races and classes to come together to undertake specific political, economic and social changes.

IWD traces its history back in the early 1900s when radical changes were taking place in a fast industrialising Western world. As a major workforce, women saw themselves oppressed by measly wages and poor working conditions. Mostly concentrated in the textile industry, women workers were discriminated against by being assigned tasks that were based on their sex. These were confined to manufacturing and domestic services.

The first documented event that marked the growing solidarity of women was a march in New York in 1908. The 15,000 women on the demonstration clamoured for better working condition and pay.

The wave of discontent transformed into a socialist movement that quickly grew in countries in Europe. What the women saw was at the root of their hardships was their being politically disenfranchised. With no voice in governance, they were left at the receiving end of the economy.

In 1910, a gathering of women from 17 countries proposed an International Women's Day (IWD). The following year gave birth to the IWD that has since grown in strength and impact.

With UN officially acknowledging the event in 1975 by declaring it as International Women's Year, the celebration of IWD has extended to many facets of women's lives both in the developed and developing countries.

From its political activist origins, IWD has increasingly made relevant to women of impoverished regions research and policy-making studies that empower their access to technology, health, educational and financial institutions.

With Shaping Progress as the global theme of this year's IWD, UN has taken a more committed stance by identifying a nine-fold programme benefiting both women and children which focuses on extreme poverty eradication, advancement of social and environmental rights, increasing level of primary literacy and health and sexual education and fighting AIDS and other fatal diseases.

As women all over the world galvanise their efforts, there is no doubt that we may just be able to achieve a more just and humane world. The women's traditional solidarity march this month that has graced newspapers all over the world has one only message to tell: "We shall not be overcome."