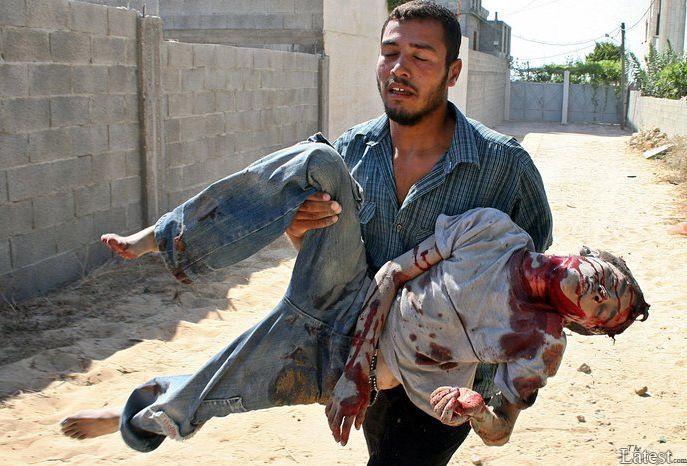 It is hard to imagine how much worse the situation could get, but the confrontation in Gaza could see a dangerous escalation in the coming days as Iran threatens to break the Israeli blockade and deliver urgently needed medical supplies and other aid to the war-torn coastal strip.

If the Israeli ground invasion currently underway in Gaza becomes a full-fledged occupation with the resultant removal of Hamas from authority, then the arrival of the MV Iran Shahed ship in the Mediterranean will be something of an anti-climax. Too little, too late.

But while even a small stretch of beach remains under Palestinian control, there is the frightening possibility that Iranian Red Crescent volunteers might attempt a landing.

Despite the Israeli "withdrawal" from Gaza in 2005, the Jewish State controls all border crossings, airspace, and the coastline-creating what critics have described as the largest open air prison in the world.

Following the victory of Hamas in parliamentary elections in 2006, the territory was essentially placed under siege, with increasing shortages of even the most basic of daily necessities. Hamas has a long history of political and armed opposition to the state of Israel which it regards as an illegitimate entity.

Iran has been a vocal critic of Arab nations, Egypt in particular, for not doing enough to break the Israeli siege and help the 1.5 million people of Gaza, and it seems they have now taken things into their own hands.

Even at the best of times Iran's action would have been interpreted by US and Israeli authorities as a deliberate provocation. But given the rapid deterioration in the security situation over the past week, there are those who would accuse Tehran of seeking a direct and possibly violent confrontation.

But whatever their motive, nobody should be surprised that Tehran is making a move.

"In recent years, in part due to poor US foreign policy decisions, Iran has been rising a power in the Middle East," says US-based political analyst and activist, Kevin Zeese.

"By taking this type of action, they will be admired by many people of Arab and Persian descent," he said.

Describing it as a "judo move"- Zeese said through this non-violent action Iran will strengthen itself, and Israel will be weakened.

"It is a judo move that uses Israel's strength against them."

Zeese said it is a no-win situation for the Jewish State.

"If they block the supplies it will make them look more inhumane," he said, "but if they let them through it will simply highlight the need for such humanitarian supplies."

"Iran is correct for taking a stand," he said, "Iran and other Islamic countries should do even more, such as breaking diplomatic relations with Egypt and Saudi Arabia unless the leaders of those countries end the Israeli siege, massacres, and invasions of Gaza."

International human rights lawyer, Francis A. Boyle, however, doubts that any Arab countries have the stomach for a confrontation with Washington.

"As for the leaders of the Arab states, most of them are in the pocket of the United States," he said, "Look at the Arab League, a worthless talking shop."

He accused the Arab League of only putting out meaningless statements in an attempt to convince their own people that they are doing something, but he said, "the Palestinians have always been on their own, and they know it."

Boyle, who has offered his services to the government of Iran to represent them in a lawsuit against Israel, says there are measures the international community should immediately consider to halt the bloodshed.

The Emergency Special Session for Palestine was first convened in 1997 and officially remains "adjourned."

Hamas came to power in January 2006 through a fair and open election process. But according to many experts on the issue, their success had more to do with a deep dissatisfaction with Fatah, the previous rulers led by Yasser Arafat, rather than any particular support for Hamas policies.

Fatah's failure to strike a firm and lasting deal with the Israelis and allegations of endemic corruption were the prime factors that decided the outcome of the election.

The United States, the European Union and Israel immediately insisted that Hamas recognise the Jewish State and renounce violence.

These actions, among others, led to increasingly deep divisions between Hamas and Fatah, with the former accusing the latter of failing to stand up for the rights of the Palestinian people.

The knee-jerk reaction of Israel and the US to isolate a democratically elected government -- simply because it didn't follow an "Israel-first" agenda-made a mockery of the so-called democracy that Washington claims to promote in the Middle East.

The US and Israel have had multiple opportunities since the election of Hamas to cut a deal with Fatah. In fact, Middle East experts have consistently and repeatedly said the best and possibly only way to effectively undermine the authority of Hamas is to deal in an open and fair way with Fatah.

But, those same experts say, Palestinian President Mahmoud Abbas is continually made to look like a fool and a puppet by his US and Israeli negotiating partners. By weakening the authority of Fatah, they say, they are simply strengthening Hamas.

They have accused Israel of deliberately working to create divisions among Palestinian factions and of provoking confrontation with the Palestinians in order to maintain the status quo and avoid having to deal with "final status" negotiations leading to an independent Palestinian state.

In fact, a well-placed source in Egypt once told me that a Palestinian state is the last thing that Israel is considering. He said he had once been present during a discussion between Middle East peacemakers Anwar Sadat, of Egypt, and Golda Meir, of Israel.

The Israeli leader had been adamant, he said, there would never be a Palestinian state. He pointed to the fact that while there have been Israeli settlers living in Golan and previously in Sinai and Gaza, the level of infrastructure development in those regions has never matched the widespread construction and permanent settlement activity seen in Palestinian populated East Jerusalem and the West Bank.

The reason, he said, is simple. Israel always planned to give back Golan and Sinai in return for peace with the nation states of Syria and Egypt. The West Bank is, and will always remain, under Israeli occupation.

However, analyst Zeese believes that despite their military superiority and massive support in Washington and Europe, Israel will ultimately lose the battle against the Palestinians.

"In the end, Gaza will have been bloodied, but the Palestinians will live to fight another day," he said, "and they will have even more allies than they had prior to Israel's most recent actions."

Zeese said Israel's friends should tell them they are making a huge mistake.

"Israel needs a paradigm shift in their policy toward the Palestinians as well as to their Arab and Persian neighbors," said Zeese.

According to Zeese, the only possible alternative to the two-state solution - the alleged aim of the existing negotiating partners - is a one-state solution in the region where the Jewish State of Israel would effectively cease to exist, but where the rights of what would become a Jewish minority would be protected by law.

"Israel's actions are creating self-inflicted wounds," Zeese said, "and they are creating new enemies. They are losing respect and planting the seeds whose harvest will mean their demise."