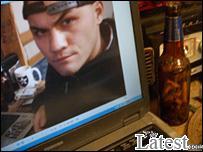 My War: Killing Time in Iraq, by Colby Buzzell, walked off with the $10,000 2007 Lulu Blooker Prize. The prize comes as the US government is clamping down on soldiers blogging without prior content approval.

Associated Press reports that as of May 14, the U.S. Department of Defence (DoD) began "blocking access 'worldwide' to YouTube, MySpace and 11 other popular Web sites on its computers and networks." While members of the military "can still access the sites on their own computers and networks," many soldiers in Iraq and Afghanistan only have access to DoD computers.

"My War may be the last frank and open military blog blook", said Paul Jones, chair of the Blooker judges. Arianna Huffington, columnist and blogger who was among this year's Blooker judges, said Buzzell's book was "endlessly surprising... delightfully profane". She said it was "an unfiltered, often ferocious expression of his boots-on-the-ground view of the Iraq war".

Buzzell started blogging shortly after being posted to Iraq, writing his website from a cyber cafe in an army tent. It's something of a triumph for blogs over traditional media said Nick Cohen, Blooker judge

The US Army eventually shut down the blog, but he had already attracted interest from publishers.

"My War tells what it's like to be a grunt fighting in the Sunni Triangle with more power and authority than the best 'embedded reporter' could manage", said Nick Cohen, columnist and Blooker judge. "It's something of a triumph for blogs over traditional media."

My War won the overall Blooker prize as well as the non-fiction category. The Doorbells of Florecen, by Andrew Losowsky, won the fiction category, while Mom's Cancer, by Brian Fies, won the comics category.

"The success of books like My War reflects the growing recognition of 'trickle-up writing', or writing that starts online," said Bob Young, chief executive of Lulu.com, the Blooker's sponsor.

We really want your news