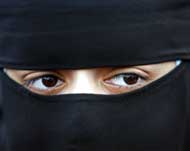 "There are people in our community who call themselves Muslims who have been threatening our national security. It is very unfortunate," Lord Ahmed told BBC radio.

"But the problem is that the politicians and some people in the media have used this for the demonisation of entire communities, which has become a very fashionable thing today."

He said Muslims are trying hard to deal with extremism themselves and to engage in the debate over the veil.

The debate began earlier in the month when Jack Straw, a former foreign secretary who now serves as leader of the House of Commons, said that Muslim women visiting him in his office should remove their veils.

Straw - who represents the town of Blackburn which has a large Muslim population  — said that people relate to others by reading their faces and the veil causes a degree of "separation" that harms community relations.

The Muslim Council of Britain has said that it is "concerned" that the remarks may play into the hands of people who are intolerant of Muslims and undermine their civil liberties.

Dr Muhammad Abdul Bari, secretary-general of the Muslim Council of Britain, said: "There can be no doubt that we are already witnessing an increasingly bigoted anti-Muslim climate being fostered in Britain.

"Recent weeks have witnessed several arson attacks against mosques and assaults on Muslim individuals around the country. Jack Straw's comments will hardly help."

The suspension of a Muslim teacher who wore the veil at school in Dewsbury, west Yorkshire has further fuelled the row.

The British minister responsible for race and community relations in the UK told the Sunday Mirror newspaper that Aishah Azmi should be fired for refusing to take off her veil at work.

"She should be sacked. She has put herself in a position where she can't do her job," said Phil Woolas MP.

Azmi has said that the garment had never been a problem for her pupils and they had never complained of difficulties in understanding her because of it.

She said she was willing to remove her veil in class as long as their were no adult men present.

Headfield Church of England junior school has stressed that the suspension had nothing to do with religion and said that face-to-face contact was essential in her role as a bilingual support worker.

The case has been taken to an employment tribunal which is expected to rule in the next few days.

Figures from across the political divide have weighed in to provide their opinions on the contentious issue of Islamic integration in Britain.

A leading figure in the opposition Conservative Party has backed Straw for initiating the debate. David Davis, the shadow home secretary, said: "What Jack touched on was whether in Britain we are developing a divided society.

"Whether we are creating a series of closed societies within our open society. Whether we are inadvertently encouraging a kind of voluntary apartheid."

Straw has not suggested that any government action should be taken to prevent the veil being worn but many Muslims have questioned the focus, by politicians and media commentators, on this one area of Islamic life.

Salma Yaqoob, national vice-chair of the political party Respect and a local councillor in the city of Birmingham, has said that many arguments against the veil are wrong.

She wrote in a blog for the Guardian Unlimited website: "Veiled Muslim women are caricatured as oppressed victims who need rescuing from their controlling men, while at the same time accused of being threatening creatures who really should stop intimidating the majority.

"What is distinctly lacking is any sense of genuine empathy for British Muslim women and how this 'debate' may be impacting on them.

"I am proud to have been elected as the first hijab-wearing councillor in Birmingham. It could not have happened if my white constituents, and those from other ethnic minorities, had taken the view that my hijab was a symbol of "separateness" or "intimidation"."

India Knight, a UK newspaper columnist, summed up the debate as part of the backlash after the July 7 bombings in London last year in which 52 civilians died, saying it had made it "acceptable to say the most ignorant, degrading things about Islam".

"It's open season on Islam  — Muslims are the new Jews," she wrote in the Sunday Times.

Taxpayers money wasted to shield guilty from the media

<font size="2"><p>As a muslim woman myself, I think that the hijab debate is getting out of hand. Jack Straw&#39;s comments have now lead people to believe that it is alright to attack Islam and it&#39;s beliefs. Even &nbsp;&#39;fake muslim&#39; Salman Rushdie has once again jumped on the bandwagon to give us his worthless opinions. </p></font>