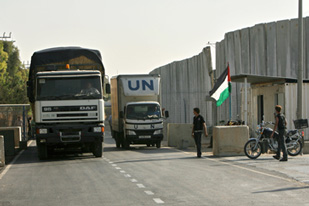 In a statement on Monday, Israel said all items would be allowed into Gaza except "weapons, war material and dual-use items".

However, prospects for rebuilding the damage from last year's Israeli military offensive on the Hamas-governed coastal enclave remain uncertain.

Construction materials like iron and steel will only be allowed to enter under Israeli supervision for use in projects overseen by the United Nations (UN) or other international bodies.

The naval blockade of the coastal enclave will also continue, as will restrictions on the movement of people within Gaza.

The Israeli announcement was a step forward in efforts to rebuild Gaza, said Tony Blair, the special Middle East envoy of the international peace Quartet, comprising the US, Russia, European Union and the UN.

In an exclusive interview with Al Jazeera from Kuwait City, Blair said: "Household items, foodstuffs, bulk materials like textiles and so on go in.

"For some construction materials like cement and so on, these will go in, but under a procedure agreed with the international community.
Tony Blair tells Al Jazeera Israel's blockade easing is a big change if implemented

"This is a big change if it is implemented, and we have to make sure it is.

"It would make a big difference because all these foodstuffs and household items, even things like cars and washing machines, will all go in as a matter of course."

Blair said further progress on lifting the blockade was dependent on restarting the stalled peace process.

"If we want to get a final lifting of all the restrictions, we have to get renewed momentum back into the peace process and unity between Gaza and the West Bank," he said.

"This is absolutely essential."

Robert Serry, the UN's special co-ordinator for the Middle East, also welcomed the change in the rules but said it should have come sooner.

"It's an important step in the right direction," he told Al Jazeera.

"I hope this change in Israeli attitude will help."

Serry said he wanted to see a further easing in the blockade.

"In principle, we should get to a situation where every item is allowed in unless there is a legitimate security reason to prevent it," he said.


However Hamas, the Palestinian faction which controls the Gaza Strip, said that the change in the rules would not benefit the territory's population.

Sami Abu Zuhri, a Hamas spokesman, said: "Israel's decision on changing the list of items permitted to enter into Gaza Strip, is useless and of no value for the Palestinian people, because the problem is not having more goods entering or not entering from time to time.
in depth


"The problem here is the siege which is imposed on the Gaza Strip. What is required is lifting the siege completely by opening all crossings leading in to Gaza."

In another Gaza-related development, the foreign ministers of Spain, France and Italy said they are to visit the Palestinian enclave this month to check on the implementation the change in the rules.

The announcement of the planned visit came a month after Avigdor Lieberman, the Israeli foreign minister, invited Franco Frattini, his Italian counterpart, to lead an EU delegation to the coastal strip.

Frattini said that the visit would come in the next few weeks.

"We hope to see for ourselves how the Israeli blockade is being eased, and personally I hope it will be completely removed," he said.

The change to the list of blacklisted items came in response to mounting international pressure on Israel to ease the four-year siege on Gaza after a naval raid on a flotilla of aid ships trying to break the blockade that left nine Turkish activists dead.

Two weeks ago, Israel announced plans to ease its blockade terms, moving from a policy of barring everything except items on a "kosher" list to a system under which everything is permitted except blacklisted items.