It's global: Journalists risking death to carry on reporting

Recently Islamic State in Raqqa sent an ominous message to an exiled Syrian journalist. Tell us who is filing covertly from the occupied city, the terrorists warned, or we will execute your father. The editor refused to name names. His father was shot to death. 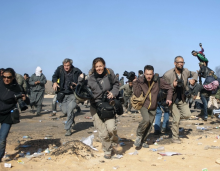 We heard this story last week from AbdAlaziz Alhamza, who works for the same journalism collective as the grieving editor: Raqqa is Being Slaughtered Silently. With a dozen reporters still filing from Raqqa, risking their lives every day, Raqqa is Being Slaughtered Silently is one of the few sources of independent news from inside its terrorized land of lashings, slavery, beheadings and crucifixions.

The collective is one of four 2015 International Press Freedom awardees who will be honoured by the Committee to Protect Journalists in New York City Tuesday. They reflect both the lengths dictators will go to silence free speech — and the creativity and almost unimaginable courage that journalists summon in response.

In addition to the online collective of mostly anonymous Syrian reporters, the honourees include a Malaysian cartoonist, Zulkiflee Anwar Ulhaque, known by his pen name, Zunar, whose work appears only online because the government allows no newspaper to carry his work; the Zone 9 bloggers, an Ethio­pian collective that came together as their government decimated the independent press; and Cándido Figueredo Ruíz , a Paraguayan journalist who shines a light on drug cartels and the corruption they engender. A reporter for ABC Colour, one of his country’s largest newspapers, Figueredo holds perhaps the most traditional job among the winners. But there is nothing conventional about his bravery: He has been shot at numerous times, and now lives under constant police guard, as does his wife.

Zunar, 53, will return to Malaysia to face a December court date on charges of sedition that could lead to a prison sentence of 43 years. The Ethio­pian bloggers too have been imprisoned and still have judicial proceedings hanging over them. Why go back?

“We do it for reform,” he said. “We have been governed by the same ruling party for 60 years. Corruption is huge. There are so many injustices. . . . I know it is an uphill battle. I’m not sure when it will end, or will I see the change in my lifetime. It’s like an endless marathon, but as long as I’m on the track I’m the winner.”

Zunar shared with us the cartoon he planned to post later that day: a drawing of President Obama, who travelled to Malaysia on Friday, stretching his arm around a prison full of political dissidents to shake hands with the Malaysian leader he has praised and golfed with, Najib Razak. For those of us who can take our freedoms for granted, the cartoon held a useful message: We should never forget the political prisoners, like Malaysia’s opposition leader Anwar Ibrahim, nor the journalists like Zunar and his co-winners who bravely take up the cause of freedom. “One of the great supports is to know I’m not alone,” Figueredo said.

*This story first appeared on The Washington Post.com.

It's global: Journalists risking death to carry on reporting