It's time to sink or swim on reality Tv show 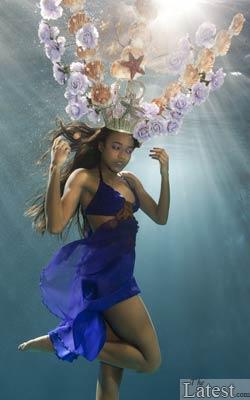 Ok, so it's getting serious now. We are down to the final eight girls and everyone is starting to crack under the pressure. But how better to relieve some stress than by beating the crap out of someone? This was one of our challenges for the week.

But before you get too excited it was all pretend. We learned how to throw punches, pull hair and smash bottles over each other's heads under the watchful eye of a stunt expert. This was so much fun and I was partnered with Mecia, who let's just say, isn't my best friend in the house.

But it's all good; adding to the realism of being cooped up in a hothouse with other girls for days on end. As physical as this challenge was it wasn't the only one for the week. The next day we were driven to a location near London's Oxford Street. To our amazement this was a challenge in the shape of a photo shoot for Faith shoes. The winners would have their photo in the front window across stores nationwide! What an amazing a campaign, and it was for selling shoes, I so could do that with ease. I wanted to win this challenge badly and so did everyone else, so the claws were out.

One by one we were taken off to do our shoot and every time one of us returned we would try and get as much information as possible. How was it? What did you do? Did they like you? I really enjoyed my set up. I was basically balancing on a window ledge in fabulous Faith shoes and I had to move about and make different shapes with my leg.

The photographer and Faith representative knew about my dance background, therefore the pressure was on to give them what they wanted. And, for the first time, we were allowed to see our images. This was really helpful and it felt like I was no longer working blind. It was a tense, stressful, long wait to hear who the winners were and it felt like the Faith representative was talking in slow motion as she gave feedback to everyone.

We noticed from early on in the competition that if they mentioned your name and gave you feedback then you hadn't won the challenge. Out of eight of us four girls received feedback. My name still hadn't been called and all I could think about was that I'm so close, please please please. Sophie and Ashley were announced as winners, but they also added that Jade and I had done exceptionally well and our photos would be on the inside of the store. I'm happy with that. My photo inside hundreds of stores across the UK, simply amazing. Oh well, I will have to wait for my front of store debut.

Despite this jam-packed week, we knew that our main photo shoot was coming up. Being in the bottom two of the house survivors last week really has made me determined to up my game and put my heart and soul into anything thrown our way. But no way was I expecting an underwater photo shoot. Early in the morning, as usual, we were driven to our location and told about our photo shoot challenge. And this definitely was a challenge. Suspended in a huge tank of water was an amazing Princess Neptune headpiece creation by Louis Marrette (one of the judges).

Our challenge was to hold our breath, swim down to the hat and pose. This sounds simple enough, but this was the hardest thing I have ever done in my life. I'm not a big fan of opening my eyes underwater as it is, but it just didn't help that it was all blurry and you couldn't see the photographer, just these random flashes of light. This wasn't my only problem. It was also extremely hard to know where the hat was. At times I would think I was doing quite well, because I was doing different poses, but then I would notice that I was 10 miles away from the hat! All wasted poses. But it was a great experience and I was really proud of myself for doing it because it was extremely scary.

One of girls let the experience beat them and panicked. We just didn't think she tried as hard as the rest of us and there was gossip going around the house that she said that if she won Britain's Next Top Model, it would be a pain for her. This resulted in aggression being thrown her way and before we knew it there was a full-blown argument in the house. All the girls put their two pennies in the mix and by the end of it everyone was ordered to their rooms by the production team.

It was a very heated situation and I felt really bad that a lot of it was directed at one person. But I guess that's just what happens in a house full of females who barely have any contact with the outside world.

Elimination again and it was definitely an interesting one. As a whole, I think we all had pretty bad photos. The comments from the judges felt like they were getting worse and more offensively comical as we went on. However it was quite ironic that one of the best photos was done by the girl who we thought didn't try that hard. Some said it was a lucky shot but who cares because she nailed it.

My photo was quite bad, but not the worse. I really wish we could see the whole roll from our shoots, because we never knew if there could be a better one, although it was claimed that our  "best shot" was chosen. That's Tv and I know the Britain's Next Top Model production team play with us to achieve maximum entertainment value for the viewer. In the end it was Daisy and Hayley in the bottom two. Hayley, the gorgeous Glaswegian, was sent home. Now there is only seven of us left and the group feels so small. We are getting closer to finding out who will be Britain's Next Top Model and I'm still in the running.

To find out how TV land plays with us even more next week tune in to Living TV, Monday 9pm.

My reality Tv show blog - mud and all