Jakarta through the eyes of a British Afro-Carib-being

I've come to Jakarta as I would a blind date - with few expectations - knowing that I've put myself out there because that's what life is about and just being grateful for the opportunity of a new experience.

My partner's here for work but that's very hush hush and on the Q-tip. Suffice to say its all very corporate and the blackberry's going off all hours of the night. I'm here in the guise of the expat wife - something I've always associated with gin drinking in the afternoon, shouting at the servants and having lunch on the verandah while the little African boy   swats away the flies.   How things change!

On the connecting flight from Dubai - 90 per cent of the cabin passengers are Indonesian women wearing hijabs and there are a couple of what look like Imams. Jakarta is 90 per cent Muslim so it's not unexpected but I'm a little apprehensive. Although modestly dressed, I'm a post-MTV RnB girl at heart. I don't have to booty-shake my way through 2009, but neither do I want to burka my way through it either. 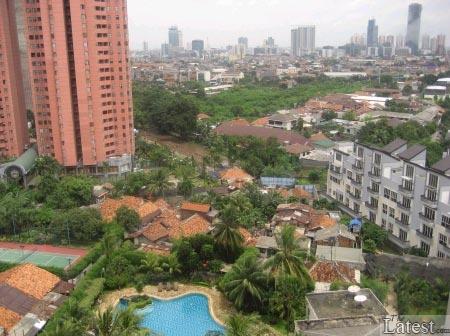 On arrival in Jakarta though - fears allayed. Muslim is a very broad term and it's actually the minority who cover themselves head to toe. Throughout the afternoon I see some knee caps, free flowing hair even some mini skirts. Just as well because it's warm here.   Twenty seven degrees.

A pleasant change from a freezing minus something in London you might think. But it's not cloudy and three days later I'm trying to reason with God. Like, I'm willing to exchange one 27-degree day for a minus something day with the sun's full glory. But no - this is Jakarta's rainy season. A grunty taxi driver (if they're more eloquent than grunty - you are onto a good thing) informs me this will last till April.

We're staying at the Crown Plaza Hotel. A corporate-older-man-type hotel. You know, the type with the kind of wooden headboard you might use to create a road block. There are watercolour paintings everywhere trying not to look like much of anything and ye olde clunky TVs of yesteryear.

So far my days here consist of sleeping off my jet-lag. Going to the gym. Going to the various restaurants and bars of the hotel. Going to the mall next door. Letting people know I'm here. Hearing about fiancÃ©'s day as Mr Corporate Jakarta man. Watching 24 Series 6. We've now both had dreams with Jack Bauer in them. Dining out.

We should be moving into Jakarta's iconic Peak Sudiman Apartments soon. Once the world's tallest residences, now they're just tall.

Till then, that's the story so far …