George Ruddock - Editor of The Voice 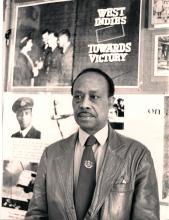 A well-known Jamaican war veteran who fought for Britain more than 70 years ago has passed away in London.

Laurent Phillpotts, a long-standing member of the UK's West Indian Ex-Servicemen and Women's Association and its former public relations officer and curator, died on January 11, aged 93, after a long battle with prostate cancer.

Affectionately known as "Laurie", he was born on August 30, 1922, in St Ann, Jamaica, and attended Kingston Technical College. Afterwards he answered the call for help with the war effort made by a desperately in need Britain, which was close to defeat at the hands of Hitler's Nazis. As a result, like almost 20,000 others from the Caribbean, he volunteered to fight in the Second World War and enlisted as a Royal Air Force (RAF) volunteer in 1943 and sailed for England at the height of the German U-boat menace in the Caribbean and Atlantic.

Phillpotts had been a trainee Linotype operator at the Jamaica Gleaner newspaper.

After a month of training at Filey's Camp, in north Yorkshire, he became a teleprinter operator and served at Coastal Command airfield in Norfolk before spending two years at No 16 (Polish) Flying Training School near Nottingham.

At the end of the war, he joined a printing company in Nottingham and was an active community activist when he was demobbed in 1947. It is in Nottingham he met his English wife, Marion, who was serving in the Women's Auxiliary Air Force (WAAF). She was a talented singer and dancer.

After the war, when the famed Windrush former troop ship arrived at Tilbury Docks from the Caribbean in 1948, he provided help for these new Caribbean arrivals by helping them get housing, further education and jobs.

Phillpotts furthered his education by attending the Leeds College of Technology, Nottingham and District Technical College and also the People's College in Nottingham on a course of English literature. During his time in Nottingham, with the help of his wife Marion, he provided a number of West Indian migrants with winter clothing and other essentials. He formed welfare organisations and sports clubs including the Nottingham Consultative Committee for the Welfare of Coloured People.

After completing his City and Guilds exams at Leeds College of Technology, Phillpotts joined a commercial printing firm in Nottingham as a Linotype operator. 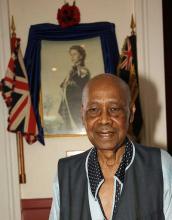 In November 1956, he produced Colonial News, the first Black weekly newspaper, which predated Claudia Jones' West Indian Gazette by two years, to provide information about the West Indies and the life of its settlers in Nottingham and to also work towards a better understanding between Black and white people in England.

Phillpotts moved to Potters Bar, Hertfordshire, in the early 1960s and worked at the Welwyn Hatfield Times. After that, he went to live at Bayswater, London, and as a trained printer he joined the Mirror Group Newspapers, a rare job for a Black Linotype operator. He joined the Printer Compositors Union, of which he was an active member.

So concerned was he at the plight of servicemen and women who had served King and country with honour and dignity, Phillpotts and a few of his fellow veterans organised meetings for ex-servicemen and women in their front rooms to discuss how to assist them.

The name of the association they formed was the West Indian Association of Ex-Servicemen (WIESA). Women were included in the organisation's name at a later date. Shortly after it was set up, Phillpotts was voted in as the public relations officer, serving until 1995. After that he became curator of its important collection of wartime memorabilia. The organisation changed its name to the West Indian Assiciation of Service Personnel (WASP).

Other members of WIESA described Phillpotts as a safe pair of hands when trouble found you. His passion was cricket and he was a member of the exclusive Marylebone Cricket Club, attending matches at its Lords ground into his 90s.

WIESA became the West Indian Association of Service Personnel (WASP). Its chair Vince McBean said: “Laurent Phillpotts will be sadly missed but his legacy lives on in WASP and the many project he started.”

Former RAF wartime colleague Neil Flanigan MBE said of Phillpotts' passing: “It is crucially important we remember this generation of pioneers, as we are all standing on their shoulders. Laurie was an integral person on the committee that built the world renowned Commonwealth Memorial Gates [in memory of African, Caribbean and Asian war veterans, at the Hyde Park Corner end of Constitution Hill, near Buckingham Palace, London]."

He added: "I recall that he was featured in the documentary film Divided by Race, United in War and Peace, which was shown in Britain, Kenya, South Africa and Cannes, France. He was appointed vice-president of the Mary Seacole Memorial Statue Appeal from 1970 to date. He will be dearly missed.”

A statue of Jamaican nurse Mary Seacole is to be unveiled this year at St Thomas's Hospital, in south London, thanks to the efforts of Phillpotts and other supporters.

Phillpotts was the UK representative of Jamaica's Garveyite Pan-Africanist Secretariat. He was a popular member of Paddington Royal British Legion.

He helped pioneer the West Indian Carib Cricket Club, the Caribbean Centre and the Association of Jamaicans.

The Jamaica High Commission paid tribute to Phillpotts' work with the diasporean community. In a new release, a spokesperson stated: “The Jamaican High Commission was saddened to learn of the death of Mr. Laurie Phillpotts, BHM (Badge of Honour for Meritorious Service) who was truly an outstanding Jamaican stalwart.”

It added: “As one of the founding members of the West Indian Ex-Servicemen's Association, Mr Phillpotts was one of the driving forces behind the memorial gates monument built in London to honour the millions of Black Commonwealth servicemen who fought for Britain in both World Wars."

“Mr. Phillpotts was a loyal Jamaican who was committed to elevating the profile of the Jamaican community and its contribution to the building of British society.

“He also believed in recognising outstanding members of the Jamaican Diaspora and was for many years the vice-president of the Mary Seacole Memorial Association and a staunch supporter of the campaign to erect a statue of her in London.

“With his passing, Jamaica has lost a wonderful Ambassador in Mr. Phillpotts. We offer sincere condolences to his wife, his children, grandchildren, the rest of his family and his many friends.”

Laurent Phillpotts was the son of Ethel May and Laurent L. Phillpotts Snr. He is survived by his wife Marion, to whom he was married for 70 years, daughter Norma, son Laurent Lloyd, granddaughter Michelle, grandson Blaise and six great grandchildren.