Journalists under fire across the Middle East 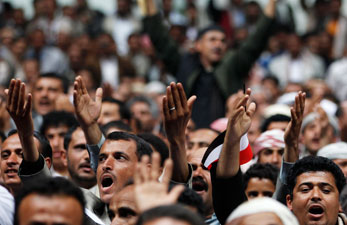 An independent organisation set up to promote press freedom and defend the rights of journalists worldwide has said it’s alarmed by the ongoing deterioration of conditions for the media in the Middle East.

Most recently the Committee to Protect Journalists (CPJ) has expressed concern about the disappearance of Atef al-Atrash, a Libyan journalist, since anti-Gaddafi demonstrations began on 17 February.

The internet has been intermittently down since Saturday in the country, according to international news reports, and foreign journalists continue to be denied entry. Al-Jazeera TV’s signal in Libya remains jammed, according to the network.

In Yemen, security forces confiscated the print run of an independent newspaper and at least one reporter was injured as demonstrations turned violent. And in Iraq, 50 gunmen reportedly shot up an independent television station while the staff of a local newspaper was forced to evacuate their offices.

"The Libyan authorities and their supporters should know that violence against journalists reporting on political turmoil will not be tolerated," said Robert Mahoney, CPJ's deputy director. "We are concerned for the safety of all journalists, in particular Atef al-Atrash."

Al-Atrash disappeared after reporting live on Al-Jazeera TV from demonstrations in Benghazi on Thursday, the network reported. He also reported that "several journalists" had been detained in the second largest city of Libya but did not provide names.

He added on the air that his mobile phone service had been cut off and that he felt there was "a clear attempt being made to isolate him," although he didn't name who he felt was pursuing him. Al-Atrash is a contributor to several Libyan news websites, including Libya-Watanona and Libya al-Mustakbal, where he often criticised the Libyan government. He also covered local news from Benghazi. 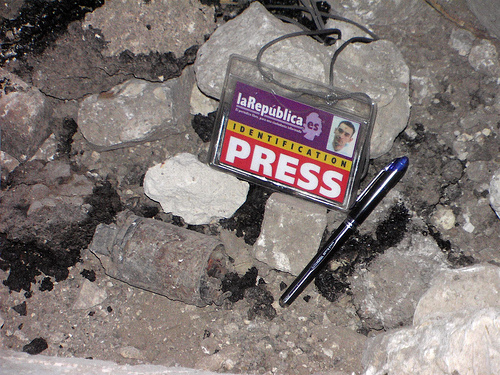 While Libyan authorities have denied entry to foreign journalists, several new organisations have sent their correspondents to the Egyptian-Libyan border, where they are waiting for an opportunity to enter the country, according to the UK Guardian.

Reports from multiple journalists, including CNN's Ben Wedeman, who reported from eastern Libya, state that the internet has been going on and offline for days. On Monday, Al-Jazeera reported that landlines and mobile phones have been cut off.  It also reported that the government is jamming the network's signal from a security forces building south of Tripoli. Al-Jazeera's signal has been intermittently jammed since 2 February, although the jamming intensified after anti-government protests began in the country.

Journalists continue to face harassment amid anti-government protests also in Yemen and Iraq. On Sunday, Abdel Karim Salam, a correspondent for Swiss Info, a Bern-based news website, was hospitalised after pro-government supporters beat him while he was covering anti-government protests in front of Sana'a University. On Saturday, security forces confiscated Al-Yaqin newspaper. The independent weekly contained a list of those injured and killed during Yemeni protests, and provided extensive coverage of recent demonstrations.

Attacks on the press also continue in Iraq. On Sunday, 50 gunmen raided a new, Sulaimaniya-based independent TV station called Nalia Radio and Television, according to Metro Centre to Defend Journalists, a local press freedom group. Nalia TV only began broadcasting on 17 February, when protests began in Sulaimaniya. The broadcasting equipment was destroyed by bullets and arson, Metro Centre reported. Iran's Press TV reported that two guards and a janitor were injured in the attack.

"They came in military uniforms," Twana Othman, a manager at Nalia TV, told Press TV. "They wore special hats so their faces could not be seen. They knew exactly what to shoot at and what to destroy. Then they poured petrol and burned everything,"

Rahman Gharib, a local journalist who reports for Metro Centre, told CPJ: "I think the attack on the station was connected to its editorial policy of covering the demonstrations and giving voice to the protesters."

On 17 February, Hawlati, an independent Kurdish newspaper, evacuated its offices after threats from the guards of the Kurdistan Democratic Party (KDP) building, Tariq Fattah, the director of the newspaper told CPJ. "Our office is close to where the demonstrations were taking place," he said. "The guards of the KDP were shouting at the door of the paper that we are traitors and that we are standing behind and leading the demonstrations."

US President has nothing new to offer Middle East

Call your leader at Copenhagen summit to make a difference