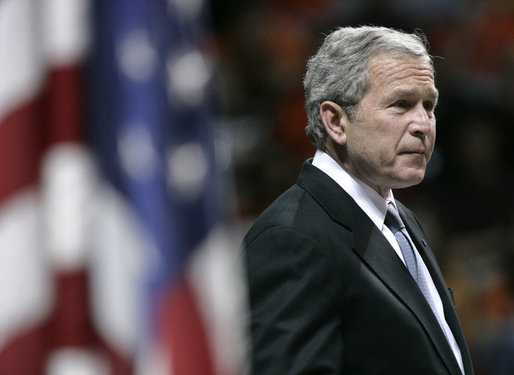 Former US president George W Bush’s Decision Points chronicles the most important decisions of his presidency and personal life.

Ahead of the book's release on November 8, Bush sat down with NBC's Matt Lauer for an interview (scheduled to air Monday, Nov. 8), and The New York Times posted an early review of the book. What have we learned so far about this "most casual of memoirs?"

1. A low point: Kanye West's attack
Bush says he should have reacted to Hurricane Katrina more quickly and was laid low by American rapper and record producer Kanye West's infamous declaration that "George W Bush doesn't care about black people" during a post-Katrina telethon. For his part, West now sympathises with the president, reports The Toronto Sun.

2. On waterboarding: "Damn right"
When Bush was asked to approve the waterboarding of Khalid Sheik Mohammed, the architect of the 9/11 attacks, his reply was an emphatic "damn right." Though human rights experts say this admission "could one day have legal consequences for him," according to The Washington Post, Bush writes that he "would make the same decision again to save lives."

3. Cheney almost dropped from '04 ticket
In the run-up to the 2004 presidential election, Vice President Dick Cheney offered to remove himself from the ticket, given his unpopularity and reputation as a "Darth Vader"-type figure. Bush considered the offer and "thought of picking Senator Bill Frist, then the majority leader, as his running mate," but decided against it. As Bush recounts in Decision Points, "I hadn't picked [Cheney] to be a political asset; I had chosen him to help me do the job."

4. A "sickening feeling" about Iraq
Bush tells Matt Lauer that he "was a dissenting voice on Iraq" who gave "diplomacy every chance to work." He also reveals that he felt sickened on learning that weapons of mass destruction did not exist in Iraq. Despite his reservations, he believes that "the world is better off without Saddam Hussein in power."

5. A candid take on his addictions
Bush will open up about his alcoholism in the very first chapter of Decision Points. The opening chapter, titled "Quitting", begins with the words: "It was a simple question, 'Can you remember the last day you didn't have a drink?'"

6. Approved shooting down 9/11 plane
The 43rd president admits that he gave an order to shoot down hijacked passenger planes on September 11, and initially thought Flight 93 -  the jet brought down in a Pennsylvania field by a passenger revolt - had been brought down by the military.