When Vogue magazine revealed their April issue cover stars to be none other than US rapper Kanye West and reality TV celebrity Kim Kardashian no one could have predicted the reaction it has provoked from fashion industry insiders, stars and the public.

Dubbed by some as the “world’s most talked about couple”, West and Kardashian’s landing of the coveted spot followed some controversy between the rapper, reality star and fashion magazine.

In an interview last October, West addressed Vogue’s seemingly intentional exclusion of his fiancé from the cover.

West said: "There's no way Kim Kardashian shouldn't be on the cover of Vogue,” he told Ryan Seacrest. “She's like the most intriguing woman right now. She's got Barbara Walters calling her like every day.”

Now, Vogue editor-in-chief Anna Wintour gives her two-cents on the decision to place the couple on the cover in her editor’s letter for the April issue:

“Part of the pleasure of editing Vogue, one that lies in a long tradition of this magazine, is being able to feature those who define the culture at any given moment, who stir things up, whose presence in the world shapes the way it looks and influences the way we see it. I think we can all agree on the fact that that role is currently being played by Kim and Kanye to a T. (Or perhaps that should be to a K?)

As for the cover, my opinion is that it is both charming and touching, and it was, I should add, entirely our idea to do it; you may have read that Kanye begged me to put his fiancée on Vogue’s cover. He did nothing of the sort. The gossip might make better reading, but the simple fact of the matter is that it isn’t true.

There’s barely a strand of the modern media that the Kardashian Wests haven’t been able to master, and for good reason: Kanye is an amazing performer and cultural provocateur, while Kim, through her strength of character, has created a place for herself in the glare of the world’s spotlight, and it takes real guts to do that.” 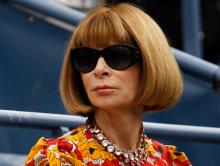 But not everybody is buying into that - literally threatening not to buy the magazine in the future.

Actress Sarah Michelle Gellar, star of Buffy the Vampire Slayer and The Crazy Ones, registered her displeasure via Twitter. She wrote: "Well ... I guess I'm cancelling my Vogue subscription. Who's with me?" Over 5,500 followers retweeted the sentiment.

Gellar's tweet was met with a retort from the cover girl's friend Jonathan Cheban, asking "Do U matter?"

Ex-Deadline blogger Nikki Finke, ever the rabble-rouser, issued a couple of tweets on the matter. She suggested the April issue should have come with a barf bag and that Wintour is past her expiration date.

Buzzfeed's Matt Bellassai promised to buy the issue - but not for the reason Wintour might have hoped. He tweeted: “I'm gonna buy the Kanye and Kim Vogue issue just so I can burn it.”

Fashion blogger Liam Calderone was matter-of-fact: “Kim Kardashian and Vogue shouldn't be put in the same sentence. End of.”

There was once a time - until the late 1990s - when Vogue's cover (and those of other magazines) was the exclusive domain of models, with maybe one or two issues out of 12 featuring an actress or other celebrity. The pendulum has swung decisively toward actresses, singers and athletes ever since.

The last model to grace the front cover was Kate Upton in June 2013. Before that, it was Gisele Bundchen in April 2010.

The April issue of Vogue will hits stands on March 31.