Kicked out: Israel's 'inhumane' deportation of the South Sudanese 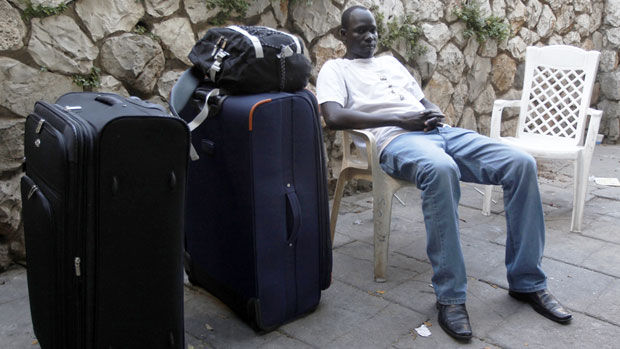 Planeloads of South Sudanese refugees from Israel have been landing in South Sudan’s capital of Juba over the past few weeks.

Many of them had been living in the poor neighborhoods of Hatikva and Shapira in southern Tel Aviv, working in such jobs as hotel chambermaids or waiters. Israel has justified the deportations with the explanation that because South Sudan seceded from Sudan in July 2011, the refugees can now return to their home country without fear.

Their calls deliberately disregard ongoing violence between Sudan and South Sudan as well as aggression between rival South Sudanese groups.  The Interior Ministry announced that the South Sudanese would receive 1,250 US dollars if they returned voluntarily and would face arrest and expulsion if they refused.

Israel hosts approximately sixty thousand African refugees (termed “infiltrators” in Israeli parlance), mainly from Eritrea and Sudan. Most, fleeing violence and instability, have entered Israel through Egypt over the past five years. Israel is barred from deporting Eritrean or Sudanese refugees, as the United Nations has declared that doing so would put their lives in danger.

Though South Sudan’s refugees constitute only a small fraction of African refugees in Israel, approximately seven hundred total or 0.1 percent of all refugees, the deportations have highlighted at least two noteworthy trends. The first is Israel’s resort to forcible and racially driven expulsions in an effort to retain its majority Jewish makeup. Second is the claim by some South Sudanese of a kind of essentialised religious, historical, and cultural affinity with Israel in order to foster a strategic bond. 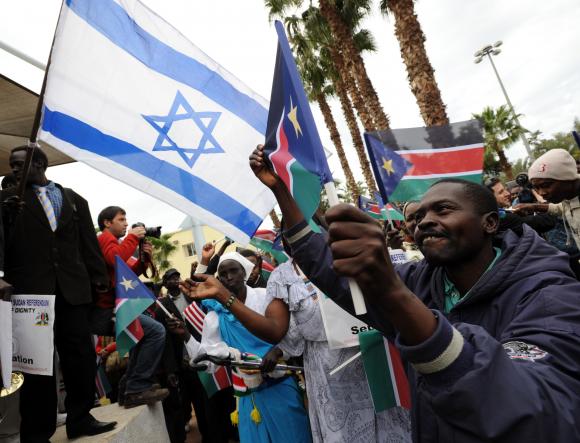 Just prior to the deportations, xenophobic manifestations of Israel’s imperative to retain its Jewish majority were clear. At an anti-refugee demonstration in Hatikva on May 24, Likud Member of Parliament Miri Regev stated from the stage, “The Sudanese are a cancer in our body.” A week later Israeli crowds chanted, “Deport the Sudanese” at a similar demonstration in Shapira.

Other politicians have also added fuel to the fire. Interior Minister Eli Yishai recently claimed that African refugees were raping many Israeli women who “do not complain out of fear of being stigmatised as having contracted AIDS.” He recently added, “Israel belongs to the white man.” A number of South Sudanese arriving in Juba have described their recent treatment in Israel as brusque, marked by visa confiscations and arrests that barred them from clearing their Israeli bank accounts or receiving final paychecks.

Though it might not be obvious from these recent events, Israel has consistently supported southern Sudan, particularly during its first civil war with the north, and it was among the first countries to recognise South Sudan as a sovereign state last year. To Israel, South Sudan is another formerly-enslaved nation that escaped the clutches of Muslim violence and intolerance. In turn, it is often seen as “black” and “Christian” versus its “Arab” and “Muslim” neighbour to the north, though the makeup of Sudan and South Sudan is more complex than this simple division suggests. As the Sudanese academic and politician Francis Deng has consistently argued, the ideas of “racial, cultural and religious homogeneity…oversimplify and falsify a dynamic picture of pluralism [in Sudan/South Sudan].”

This simple dichotomy begets the powerful notion that South Sudan is an ally to Israel in a hostile part of the world, particularly in regard to Omar al-Bashir’s regime in Khartoum. Al-Bashir’s alliance with Iran and Hamas has particularly riled Israel, with Sudan serving as a way station for Iranian weapons en route to the Sinai Peninsula and ultimately to the Hamas-controlled Gaza Strip. 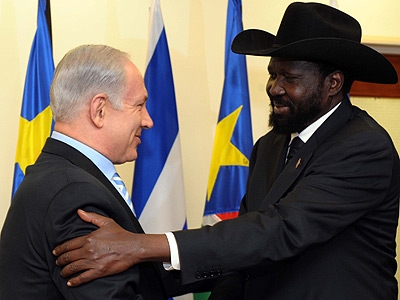 As Galia Sabar of the Department of Middle Eastern and African History at Tel Aviv University recently said: “We have a phenomenal interest in South Sudan, a Christian country in the heart of an area of great importance to us.” South Sudan presents itself along similar lines. Salva Kiir, South Sudan’s president, visited Israel in December 2011 and made such remarks as: “We have shared values. We have waged similar struggles, and we will go hand-in-hand with Israel in order to strengthen and enhance bilateral relations.” In Juba, Israeli flags are prevalent, and one neighbourhood goes by the name Hai Jerusalem (Long Live Jerusalem).

As a result of this perceived affinity, some Jewish, both American and Israeli, and South Sudanese leaders alike have registered shock at the deportations. Charles Jacobs, president of the American Anti-Slavery Group, wrote an op-ed in the Jerusalem Post that called the South Sudanese “a special people” deserving of special treatment. He recounted that many American Jews, upon learning years ago of how the Muslim north was oppressing and killing those in the south, “saw [them] as ‘the Jews of our time.’” “We should continue to treat them as the very special people they are,” he concluded, asking for the refugees to have “a bit more time” to make arrangements to return home.

South Sudanese activist Simon Deng, a former slave in Sudan and a vehement supporter of Israel (the Jerusalem Post called him “the Southern Sudanese equivalent of ‘professional Jews,’ those who work in Israel advocacy”), also appealed to the Israeli government to give the refugees another year to allow them a transition period. He particularly noted that their children need to “prepare…psychologically for moving to South Sudan, a country where [they] have never before set foot.”

Joseph Monyde Malieny, a South Sudanese student living in Israel, wrote a plea to “our blessed brothers and sisters of Israel” asking the government to grant legal status to the South Sudanese before repatriating them (ostensibly giving them more time in the country). He emphasized that “due to the brutal Islamic regime in Sudan, we fled death to reach your country.” Neither Jacobs nor Deng nor Malieny questioned the ultimate necessity of the expulsions or of retaining the Jewish composition of Israel. 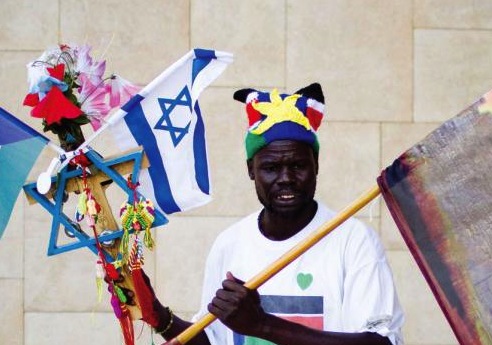 Thus, calls from South Sudanese activists as well as those sympathetic to the refugees, while stressing the affinity between South Sudanese and Jewish people, asked the Israeli government to allow more time for the refugees to get their lives in order before deportation. This request went unheeded. The strategy had worked before in a different time and place. US support for the southern Sudanese was in large part fuelled by the similar perception that Muslim northerners were persecuting Christian southerners. With a strong American evangelical lobby as well as personal support from George W Bush and Christian-oriented members of Congress, the United States led the charge in the 2000s for South Sudan’s secession. The South Sudanese deftly used this notion to their advantage. “The SPLM [Sudan People’s Liberation Movement] effectively used Christianity and the bad Muslim/good Christian narrative to generate support for their cause in the United States,” a US government official said last year.

In this case the South Sudanese government has been complicit in the deportations, reportedly saying to refugees that “if the Israeli government doesn’t want you…go back” and even helping to coordinate the deportations. As such, the recent use of the “bad Muslim/good Christian narrative” by some South Sudanese has been less official in nature than the SPLM’s mobilisation of it suggested pre-secession.

Yet it is still telling of the Israeli government’s single-minded focus on the deportations that it did not entertain the meagre request from prominent citizens for a bit of leniency for “the Jews of our time.” Though the people of South Sudan are seen as those “who will be [Israel’s] very good friends in a very hostile world,” the Israeli government has been more concerned with purging the country of “infiltrators” than with fostering this relationship or, indeed, than with enhancing its image internationally.

Hence, Israel’s conservative politicians have ramped up an atmosphere of radicalisation with xenophobic rhetoric as well as a revised Prevention of Infiltration Law that now allows Israeli authorities to detain all asylum-seekers crossing the border for three or more years before their deportation. And the outspoken minister Eli Yishai has vowed to clear the country of all illegal immigrants in the next three years.

Regional developments have likely played a role in this increase in Israeli xenophobia. As external tensions grow, Israel both lashes out at its domestic population and uses it to distract from broader regional concerns. With recent nuclear talks between the UN Security Council plus Germany and Iran failing to produce results, both Iran and Israel have indulged in aggressive statements alluding to military action. Israeli president Shimon Peres recently said, “If the Iranians … don’t heed the warnings, the calls and the economic sanctions, the world will look to other options.”

And last week an Iranian General for the Revolutionary Guards was quoted as saying that Iran could strike Israel within minutes of an attack. Furthermore, with the recent ascension of the Muslim Brotherhood in Egypt (despite its curtailed power), political Islam looks as if it will play an increasingly influential role in the neighbourhood. These developments are threatening to Israel, and the government has responded in part by turning inward, striking out at those it can more easily control and accelerating construction of a security fence along the Sinai border to deter African refugees from crossing into the country.

In a recent interview on Al Jazeera TV regarding the deportations, the Israeli journalist Gideon Levy argued that Israel’s policy of only allowing Jews to settle in the country - whether black, as in Jews from Ethiopia, or white - is “unacceptable in the modern world.” “How do you call it?” he asked. “Is there any other name but nationalism or racism?” Ali Abunimah has suggested that the South Sudanese deportations are but a dress rehearsal for mass expulsion of Israel’s non-Jewish indigenous population - Palestinian citizens of Israel - if an independent Palestinian state is established.

But while Levy, Abunimah, and like-minded analysts and citizens are dismayed by the recent deportations and the philosophy behind them, governmental plans suggest that such an attitude and its resultant policies will continue - even when such plans mean an even more tarnished human rights reputation and a risk of alienating an ally that some have called “the second Israel.”

*Mimi Kirk is editor, with Chris Toensing, of Uncovering Iraq: Trajectories of Disintegration and Transformation (2010) and, with Rochelle Davis, of the forthcoming Palestine and the Palestinians in the Twenty-first Century.