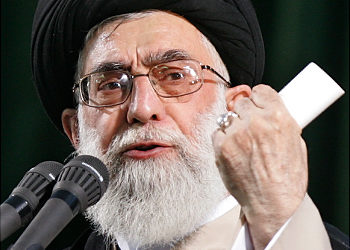 Khamenei declared that such a policy only showed Washington's frustration.

Last week, US Secretary of State Hillary Clinton challenged Beijing and other governments to end internet censorship, placing China in the company of Iran, Saudi Arabia and others as leading suppressors of online freedom.

The internet has become a battleground during domestic turmoil in Iran after June's disputed election, with the authorities blocking access to some opposition websites and pro-reform Iranians using it to spread word of new protests.

Government officials have portrayed the opposition protests that erupted after the presidential poll as a foreign-backed bid to undermine Iran's Islamic system of government.

"The Americans have said that they have allocated a $45 million budget to help them to confront the Islamic Republic of Iran via the Internet," state television quoted  Ayatollah Ali Khamenei as saying in a speech.

"This decision shows the height of the enemy's frustration. They have spent tens of billions of dollars in the past (in confronting Iran), but have achieved no results," he said.

The US Senate voted in July to adopt the Victims of Iranian Censorship Act which authorises up to $50 million for expanding Farsi language broadcasts, supporting Iranian Internet and countering government efforts to block it.

Iran has accused the West of waging a "soft" war against the Islamic state with the help of intellectuals and others inside the country.

America cut ties with Iran after its 1979 Islamic revolution, which toppled the American-backed Shah. Tehran and Washington are now at odds over Iran's disputed nuclear work.

Khamenei said the United States had been planning to orchestrate "riots" in Iran, an apparent reference to post-election unrest.

"America and Israel were and still are the most hostile of the enemies of the Islamic system and the Iranian nation," he said. "All America's plots and efforts during the past 30 years were fruitless and I'm surprised that they didn't learn a lesson from the past," Khamenei added.

Lacking newspapers, the opposition has used the internet and other means of communication to spread the word about rallies. Internet messages have been circulating about protests on February 11, when Iran marks the anniversary of the 1979 Islamic revolution.

US President has nothing new to offer Middle East

Statesman blames US for Gaza war