When Tommie Smith and John Carlos gave a gloved Black Power salute on the Olympic podium in October 1968 it sent a shockwave through sport. But what happened to the other man on the platform who supported them?

Forty years ago, two Black Americans, Tommie Smith and John Carlos, won gold and bronze medals in the 200m final at the Mexico Olympics, and used their time on the victory podium to protest with a Black Power salute.

The photograph of the two men with their heads bowed, each of them with an arm raised in the air and a fist clothed in a black leather glove, is one of the most striking images of the 20th Century.

Their actions caused havoc at the games, ensuring the pair were ejected from the US Olympic team. But three men won medals in that race, and the consequences for the third athlete on the podium would be every bit as significant.

The silver medallist was a laid-back Australian, an up-and-coming runner called Peter Norman who, in the words of his coach, "blossomed like a cactus" when he got to Mexico. While observers expected the Americans to make a clean sweep of the 200m medals, Norman kept them interested by breaking the world record in the heats. 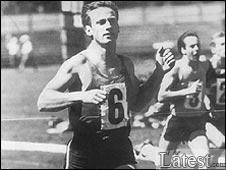 An apprentice butcher from Melbourne, he had learned to run in a pair of borrowed spikes. More significantly, he had grown up in a Salvation Army family, with a set of simple but strong values instilled from an early age.

As his nephew Matt Norman, director of the new film, Salute, remembers: "The whole Norman family were brought up in the Salvos, so we knew we had to look after our fellow man, but that was about it."

In Mexico, that was enough for Norman, who felt compelled to join forces with his fellow athletes in their stand against racial inequality.

The three were waiting for the victory ceremony when Norman discovered what was about to happen. It was Norman who, when John Carlos found he'd forgotten his black gloves, suggested the two runners shared Smith's pair, wearing one each on the podium.

And when, to the crowd's astonishment, they flung their fists in the air, the Australian joined the protest in his own way, wearing a badge from the Olympic Project for Human Rights that they had given him.

The repercussions for Norman were immediate. Seen as a trouble-maker who had lent a hand to those desecrators of the Olympic flag, he was ostracised by the Australian establishment. Despite qualifying 13 times over and being ranked fifth in the world, he was not sent to the following Munich games, where Australia had no sprinter for the first time in the Olympics. Norman retired soon afterwards without winning another title.

Divorce and ill-health all weighed down on him over the next few years. He suffered depression, drank heavily and grew addicted to painkillers after a lengthy hospital stay. During that time, he used his silver medal as a door-stop. One of the things that kept him going was the hope that he would be welcomed and recognised at the Sydney Olympics. As his nephew puts it: "Then his life would have come full circle."

He was to be disappointed. In 2000, Peter Norman found himself the only Australian Olympian to be excluded from making a VIP lap of honour at the games, despite his status as one of the best sprinters in the home country's history.

But the US athletics team was not going ignore this omission. They invited Norman to stay at their lodgings during the games and welcomed him as one of their own. In an extraordinary turn of events, it was hurdling legend Ed Moses who greeted him at the door and that year's 200m champion Michael Johnson who hugged him, saying: "You are my hero."

In 2004, Peter's nephew Matt started work on Salute, a documentary that, for the first time, brought all three athletes together in a room to tell their story of that day in Mexico.

Two years later, Peter Norman had just seen the film for the first time and was about to embark on a publicity tour to the US when he had a heart attack and died. Tommie Smith and John Carlos, to whom he had always stayed close, travelled to Melbourne to act as pallbearers at his funeral and remember their friend.

"He was that committed and I didn't know that," adds Smith.

In 2004, a 23ft statue honouring Smith and Carlos was put up in San Jose State University. This huge replica shows each of them with their fists in the air, just as they stood four decades ago in Mexico.

The place for the silver medallist is empty. It is where students and tourists stand to have their picture taken, when they want to take their place in sporting history. Peter Norman is featured in the new film now being shown all over Australia and the absent athlete spot reflects on his legacy.

Matt Norman says: "I'm a firm believer that in a victory ceremony for the Olympics, there's three guys that stand up there, each one's been given about a square metre of God's earth to stand on, and what any one of the three choose to do with his little square metre at that stage is entirely up to him."

"If it hadn't been for that demonstration on that day, it would have just been another silver medal that Australia picked up along the line. No one would ever have heard of Peter Norman."

Salute is now on release in Australia, and being shown at various film festivals around the world.

A Day Fit For A King

Not an all Black Vogue afterall

No Barack possible in Britain