Letter from the climate change summit 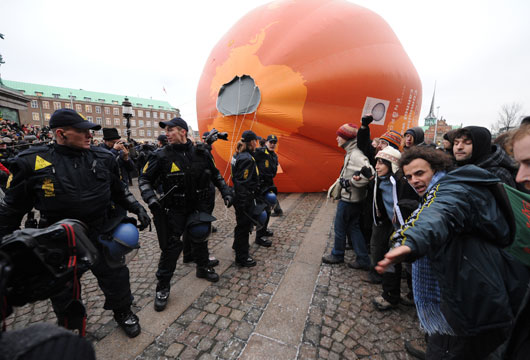 Each border I successfully cross, the right to move freely feels more and more fragile. This feeling, familiar to many crossing lands around the globe, is new to me.

It heightens at the sight of the policeman's gun, at the thought of my vacant passport gaze scanned and delivered to desks across Europe via Interpol or whatever else they choose to do with my 2D face and the map of my movements.

Did the guy at the coach check in desk have a cheeky glint in his eye when he asked "What's happening in Copenhagen then, so many people going?"Was I equally mischievous when I replied "These big climate talks and massive climate justice protests." People are making such journeys to here. To meet, to connect, to create, to fight for justice. Swarming from such varied starting points, thousands and thousands of different routes finally joining together.

To Copenhagen, December 2009. Why? Bureaucrats have said "Impossible". Corporations, from their watchtowers, have said 'Only if we get paid'. Presidents and prime ministers have ummed, erred, blushed and wanted to resort to 'There's a recession!' without calling it that.

Friends have naively queried "How do you know the outcome before it's happened?", media commentators have leapt on controversy, big NGOs have asked for more of the same and navy blue base layers are the new anarchist black. To anyone new to climate politics it must seem like the entrance to Debenhams at the start of the January sale: too loud and too many elbows.

The favourite description of the historical moment seems to be 'Last chance'. But to me, riding from one consensus meeting to the next, meeting people from places I've never been, connecting, organising, discussing, dreaming, plotting and planning...this mobilisation feels like the beginning of something that from here will only grow.

Like a bright dawn with corporate lobbyists shut out and stuck under expensive umbrellas. Like morning grey on sullen be-suited bureaucrats, forced to remain in their hotel lobbies making calls, disparate and un-smugged. Like a 6am rise, giddy and determined, before a day to take over streets, tear down fences, block bridges and Reclaim Power.

I cross all the borders no problems, no questions; a few groups on the bus get asked about their accommodation and plans, and produce printed documents corroborating their lobbyist status. My bags weren't checked once and I long for the goggles and stink-a-room capsules I left behind - but I shudder to think of the extensive bag searching that the Climate Camp coaches will probably be subjected to.

In the convergence spaces in Copenhagen people are busy building everything from sleeping spaces to bikes to meetings structures to movements. One person says to me over a midnight tea: "I'm looking at these two weeks like one long day - right now it's early in the morning, we're getting ready, and I am excited!”

Why Hanging Saddam Is Wrong