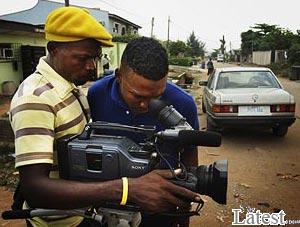 It is day five of filming in the Nigerian crime movie The Controllers, and two members of a fraud syndicate are having a stand-off at their boss's luxury pad. The stony silence between the pair, however, is nothing to do with the build-up of dramatic tension.

"You don't know your lines!" scolds the director, pointing at the script that one actor hasn't bothered to memorise. "We won't film until you know what you're supposed to say."

In Hollywood, or indeed its Indian cousin Bollywood, such behaviour would not be tolerated. But this is Nollywood, and in Nigeria's answer to Tinseltown, the words "Lights, camera, action" are not so much a catchphrase as a wish list.

Cast members routinely learn their script a few minutes before going on camera, if indeed they turn up at all. The lighting on set is constantly interrupted by power cuts. And when one of the Controllers has a brush with the law, the policeman turns out to have a set of working handcuffs, but no key.

Yet despite low production values, trite plots, and acting that would shame an amateur dramatics production, Nollywood is booming like never before.

Typically producing each film in less than a fortnight, for $15,000 a time, the country's high-speed, low-budget movie industry is one of Nigeria's few success stories. It churns out up to 2,000 offerings a year and outsells both its western and eastern competitors.

Nollywood actors have become household names, not just among Nigeria's 130 million population, but across the whole of English-speaking black Africa, with Nigeria now the world's third-largest producer of feature films after India and the US.

While the likes of Serpent in Paradise and Evil Finger may not be as slick as their Hollywood counterparts, they offer one thing that the likes of George Clooney and Brad Pitt can never provide: characters and stories with which an African audience can identify.

"The attention to detail and quality of the acting is not always as good as it should be," said David Mackenzie, 35, whose role as gang boss Cosmo in The Controllers is his 40th film in 10 years. But people don't mind, because they are stories from an African perspective."

Their films, sold on CDs for 500 naira ( £1.50) a time, are all "straight to video", in that they are made for the rental and retail markets rather than the cinema. Plots reflect the concerns of everyday Nigerian life: in The Controllers, for example, Cosmo is a wealthy "419" scamster, specialising in internet fraud. Other films deal with Aids, corruption and witchcraft, as well as re-enacting ancient tribal folk tales.

Be it a voodoo flick or a romance, filming is seldom easy. In Lagos, just getting cast and crew together is hard because of the two and three-hour traffic jams that clog the roads. Street filming also attracts the attention of "Area Boys", hoodlums who charge "taxes" on producers, and vast crowds of onlookers.

"You will get street hawkers wandering past, yelling loudly just as you are filming a scene," said Mr Mackenzie. "You have to pay people to stay out of the way, or hire armed cops."

Once the film is in the can, there are the censors to worry about. Mindful of threats to public morality, Nigeria's state film watchdog disapproves of movies in which criminals get away with it.

"If you film one where a crime boss isn't punished or jailed, you may be asked to reshoot," said Mr Mackenzie. "A lot of film makers just dodge the censors altogether."

Nollywood's 300-odd producers now bring in revenues estimated at $250 million a year. Yet their work is virtually unheard of outside of Africa, except among Nigerian diaspora communities in the likes of Peckham in south-east London - whose own lives are depicted in films like the 2003 hit Osuofia In London, about the adventures of a bamboozled villager in the big city.

Should Hollywood ever sink money in, investors might start by finishing off The Controllers. The film is missing its intended final scenes because several actors had to rush off to other filming commitments. As a result, it ends with Cosmo unpunished for a murder - leaving the film's producer potentially facing the censors' ire. In the ever-practical world of Nollywood, however, there is always a solution.

"They will probably just do a sequel," said Mr Mackenzie. "Then they can get people to buy two movies, instead of one."

Half of US voters say bomb Iran if sanctions fail