Lily's back where she belongs 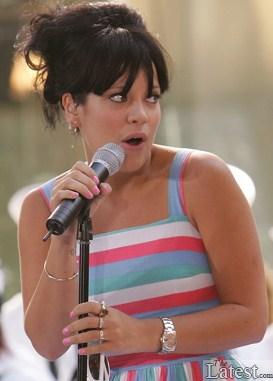 UK pop recording artist Lily Allen, has achieved the coveted number one spot in the British music charts with her brand new album It's Not You It's Me and what a worthy winner. Her second album, at just 24-years-old, is jam packed full of 'bangin choons' with an opener titled Everyone's At It, where Allen sings about the worldwide drug culture. This is tipped to be her second number one single following on from her recent release The Fear, a song about the fickleness of fame. It's uber catchy.

The third single from the album, Not Fair, displays Allen's cheeky side. She sings: I lie here in the wet patch in the middle of the bed, I'm feeling pretty hard done by, I spent ages giving head. Allen also blasts men in Never Gonna Happen where she sings about valuing her freedom, a theme which runs through the melodic I could Say. However, Allen is not anti-men by any stretch of the imagination. It is apparent that she longs to be happy with the right man but has not found her prince charming just yet.

The number Who'd Have Known is a positive, uplifting song and it is obvious she is fond of that 'fella' she is singing about . This is pretty sweet stuff. Back to the Start is a retro rocky number, 'hardcore' and full of attitude. It looks at a failed friendship.

Allen also has songs on the album dedicated to her parents. Chinese is a feel-good song about her mother and life's simple pleasures.   He Wasn't There is about Allen's famous father, the actor Keith Allen, who walked out on the family when the singer was just four-years-old. In this tune Allen says she forgives him and describes how much she loves him. The melody is fitting with an old school vibe.

The young songstress also takes on two daring songs about   two big subjects. Fuck You, aptly titled, is an impassioned attack on ex-US president George W Bush. She sings: Fuck you, fuck you very very much, cause we hate what you do and we hate your whole crew so please don't stay in touch.

Him on the other hand is a song about God. It is full of questions. In her own inimitable way Allen ponders on who he is with lyrics like 'do you think he's ever taken smack or cocaine'.

This album has been long overdue and it's really been worth the wait. If you haven't already got it then what are you waiting for?

Why Didn't The BBC Get This Joke?