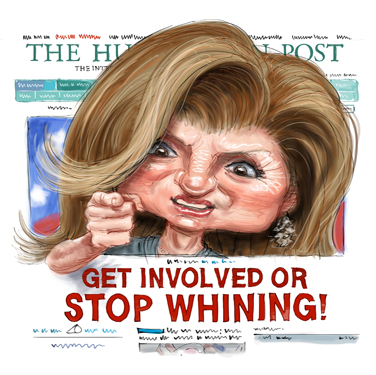 Professional designers have finally had it with news website Huffington Post always asking for free shit all the time.

You're a publicly traded company now, HuffPo. You can design your own damned logo for politics coverage.

The HuffPo article "Enter The Huffington Post Politics Icon Competition" has, over the past 11 days, become fiercely hated by basically everyone who read it. It asked for "proposed designs for a new HuffPost Politics logo... As the 2012 election news cycle revs up... Do you know your way around Photoshop...? Have a cool idea for a logo that screams 'awesome politics coverage'?"

First up were those who posted comments and weighed in with notes like "this is more than a little despicable­" and "you rake in tons of money, but you can't do the proper thing and hire a real designer" and "this is so low-rent." Then AdWeek  reported a formal attack campaign by a group of designers calling themselves  AntiSpec, since they oppose spec ("speculative") design work. And then the American Institute of Graphic Arts, the leading professional design association, said  HuffPo is being unethical.

So after alienating other websites and various writers, HuffPo has now alienated designers, thanks to its campaign to try and cozy-up to designers.

HuffPo is telling everyone "we felt this would be a light-hearted way to encourage HuffPost Politics users to express another side of their talents." So this is apparently some kind of comedy failure, as well. Looks like someone's 2012 is off to a glorious start.