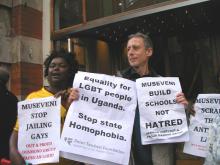 The London UK hotel where President Yoweri Museveni was speaking last night (May 7) was besieged by Ugandan Lesbian Gay Bisexual and Transgender (LGBT) people and their supporters in a noisy protest with drums, vuvuzelas and chants.

They caused a constant background disruption to the president’s speech to Ugandan community and business leaders based in the UK.

The protest took place outside the St James’ Court hotel near Victoria.

The Ugandan President’s evening speech was an add-on event to his main commitment: the UK-Uganda Business Forum at Lancaster House, which was backed and facilitated by the Foreign Office.

The protest was organised by the African LGBTI Out and Proud Diamond Group, with the support of STOPAIDS, the RMT union and the Peter Tatchell Foundation

They said British Foreign Office collaboration with the Ugandan government and support for the UK-Uganda Business Forum calls into question prime minister David Cameron’s commitment to tackling rising homophobia in Uganda and across Africa.

"It is hypocritical for the UK government to claim to be promoting LGBTI rights internationally and at the same time rolling out the red carpet for regimes like Uganda that persecute gay people," said Edwin Sesange, the Ugandan Director of the African LGBTI Out and Proud Diamond Group. The UK government should come clean on its progress with promoting gay rights in countries like Uganda that they host and collaborate with. 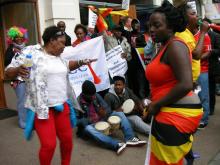 He added: "At this early stage since the Anti-Homosexuality Act (AHA) became law, it is questionable for Ugandan government ministers to claim that the campaign against the homophobic legislation has had no effect on the Ugandan economy and inward investment.

"President Museveni is more likely to attract foreign investors if he ensures good governance, financial probity and human rights. The AHA is a negative, which is turning off many would-be western investors,” said Sesange.

Peter Tatchell, Director of the Peter Tatchell Foundation, added: “Gay people are not the cause of Uganda’s problems.  The government of Uganda should fight poverty and HIV, not gay people. It is two-faced for the UK government to condemn homophobia while hosting President Museveni, whose government has legislated one of the world’s most draconian anti-gay laws. The Anti-Homosexuality Act punishes any form of same-sex contact - even mere kissing and caressing - with mandatory life imprisonment.

“Museveni is a tyrant who presides over a corrupt regime that is guilty of widespread human rights violations, including the arrest of opposition leaders, torture and the suppression of free speech. The UK government should not be drumming up business to sustain his autocratic rule. ”

While new HIV infections are declining in most African countries, Uganda is bucking the trend, with a rising epidemic.

Ben Simms, Director, STOPAIDS, said: “The anti-gay law has put at risk the lives of LGBT Ugandans and an effective AIDS response. It is shameful that the Foreign Office has given the Ugandan government the red carpet treatment, with ministers speaking on the same platform as Museveni. It seems British business interests have trumped the human rights of Ugandans. We are left wondering what Hague’s strategy for tackling homophobia really is.”