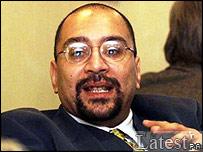 London's mayor has suspended his race adviser after a series of allegations of corruption. Mayor Ken Livingstone said he had taken the step after Lee Jasper himself asked for the newspaper allegations to be referred to the police to investigate - a claim that is classic City Hall spin. A discredited internal inquiry had previously cleared Jasper of any wrongdoing.

The allegations concern money paid by the London Development Agency (LDA) - the mayor's business arm - to a number of Black organisations. One of them was Brixton Base which is run by Errol Walters, a friend and close associate of Jasper.

An internal LDA inquiry found that Jasper had acted legally. The report said it did not have the power to look at claims private individuals took money from organisations to which the LDA had given funds.

It has referred these allegations to the police to investigate. But the London Assembly described the report as "unsatisfactory" and has called for an independent inquiry.

"I am being prevented from clearing my name, Black organisations across London are being weakened by a systematic campaign in the Evening Standard from seeking funds, and a deliberate attempt is being made to divert attention from the real issues confronting London at the Mayoral election," he said.

"This is being done deliberately and consciously - far from seeking clarity, the Evening Standard for 10 weeks has been running stories of false allegations against me without taking alleged evidence to the police."

Livingstone stressed the police had not approached him and that he thought the investigation would clear his race adviser.

"The Evening Standard should immediately take any evidence it claims to have to the police or stop making these false allegations - in the good old phrase, 'put up or shut up'.

A senior news executive told The-Latest: ''We're only too happy to hand over our findings to the police. This is not about race, as Jasper and Livingstone have suggested, but about corruption and one of the Mayor's most senior advisers damaging the interests of Black community groups not helping them."

The executive added: "Of course, the Mayor will try to spin his way out of trouble by saying that Lee Jasper has been suspended, the police are dealing with it and so nothing more can be said until they complete their investigation. Ken Livingstone is a very ruthless political operator but we will continue to make sure he is made accountable to Londoners."

BRIXTON BASE set up to create a creative training hub for Black youngsters. Jasper is the patron and a close friend of his, Errol Walters, is director. Since August 2005, Brixton Base has received  £287,000 from the LDA for "premises" - even though it has occupied an LDA-owned building throughout that time, was charged no rent in the first year and hasn't paid the rent demanded since December 2006.

The LDA paid a further  £208,000 to Brixton Base for the training projects. However, only three short projects were ever run. And the director of one of them, film-maker Shango B'Song, told the Standard that he in fact financed nearly all of it out of his own pocket - and saw almost none of the LDA grant given to pay for it.

Last month, LDA auditors sent into Brixton Base reported that at least  £70,000 was missing. And last week, deeply damaging leaked emails showed that Jasper intervened at every stage to fund and protect it - in a way described as "not appropriate" by the LDA's own chief executive.

DIVERSITY INTERNATIONAL, a company run by a close friend of Jasper's, Joel O'Loughlin. DI was paid  £346,000 to create a website for London businesses, even though it has no web expertise and is based in Liverpool. The website was never properly delivered, O'Loughlin put DI into liquidation and all the money has vanished.

Leaked emails show the LDA wanted to sack O'Loughlin - but following an intervention by Jasper, they ended up instead offering him another  £250,000 and a lucrative consultancy. The only people sacked were two LDA officials who spoke out against the proposed deal.

ETHNIC MUTUAL, which received  £350,000 of LDA money. Last month, Jasper admitted that  £18,000 of this money had been improperly diverted - without his knowledge, he insisted - to bail out a loss-making company of which he is a director.

GREEN BADGE TAXI SCHOOL, the first of the projects to attract the attention of the police. Run by two close associates of Lee Jasper, Greg Nowell and Clive Grey, Jasper ensured that it received at least  £350,000 in funding from the LDA and TfL.

The idea was to train ethnic minority taxi drivers. But two instructors at the "school" told us it never functioned properly, never trained more than a handful of people and lacked even proper maps and textbooks. Bank statements seen by the Standard show that within days of the LDA grant being received, it was siphoned off to a series of front companies run by Nowell and Grey.

Another tenant in the same building, Harriet Pickering, was subjected to a campaign of "harassment, violence and intimidation" when Green Badge decided it wanted to expand into her area and obtained a High Court injunction banning Nowell and Grey from the building.

EUROPEAN FEDERATION OF BLACK WOMEN BUSINESS OWNERS, run by another associate of Jasper, Yvonne Thompson, received at least  £36,000 from the LDA for her - even though she was an LDA board member at the time. LDA officials were extremely worried about this, describing it as a " pecuniary conflict of interest".

DESHBANGLA FOUNDATION in which another friend of Jasper's, and a former Mayoral adviser, Kumar Murshid, declares an interest. The foundation received  £30,000 from the LDA - but again, has never filed any accounts and there is no trace of the money.

QUESTIONS OVER SEVEN OTHER ORGANISATIONS

Founded by Lee Jasper. Apparently independent, but accused of acting as a front for Livingstone and Jasper to make political attacks on their opponents. The Trust's Blink website took a key part in a campaign against Jasper's enemy, Trevor Phillips, head of the Commission on Equality and Human Rights. Leaked emails show it was funded and ordered by Jasper.

Based in the same building as Brixton Base and with the same director, Errol Walters, a close friend of Jasper. Accused of doing virtually no real work in return for its GLA grant.

Run by Yvonne Thompson, friend of Lee Jasper and an LDA board member at the time, it was funded, raising serious concerns about a conflict of interest. Accused of doing little real work in return for its grant. LDA officials wanted to stop funding, but were persuaded to grant a further  £400,000.

Run by Simeon Grossett, associate of Lee Jasper and board member of BLF and ACBN (see above.) Statement of activities in its accounts is simply the same words each year, cut and pasted. A supposed "computer training centre" funded by public money turns out to be a solicitor's office which told us it only acts as a postbox.

Run by Joel O'Loughlin, director of Diversity International (which is under police investigation). No accounts and no indication where the money went.

Run by Rosemary Emodi, Jasper's former City Hall deputy, who was forced to resign last month after lying about a free trip to Nigeria.

Jasper is secretary of this organisation, formed by him, Murshid, Livingstone and the Socialist Action (SA) gang of Redmond O'Neill, Anne Kane, Simon Fletcher, when they split from the Anti-Racist Alliance. SA leader John Ross and the others are now highly-paid key advisers to Livingstone.

THIS IS JASPER'S NETWORK: FROM HIS DISGRACED DEPUTY TO THE FRIENDS IN THE FIRING LINE:

ROSEMARY EMODI
As Jasper's deputy for the past eight years she has been at his side for his most controversial decisions, including plans to replace the Notting Hill carnival. Says she is a barrister, but does not seem to have practised. Sacked after she lied about a foreign trip.

ERROL WALTERS
A race activist and close friend of Jasper's as well as being director of two projects - Black Londoners' Forum and Brixton Base - which have received almost  £600,000 in LDA funding. Also close to Ms Emodi, who he accompanied on her ill-fated trip to a luxury Nigerian beach resort.

YVONNE THOMPSON
Guyanan-born businesswoman, and friend of Jasper. Runs the European Federation of Black Women Business Owners. Was a member of the LDA board at the time cash was given to controversial projects. Also runs the African Caribbean Business Network which received more than  £1m from City Hall.

JOEL O'LOUGHLIN
Another close friend of Jasper who runs Diversity International, which received  £346,000 to run a website for London business, despite having no expertise in computers before going into liquidation. LDA boss Manny Lewis had concerns but backed off after Jasper got involved.

KUMAR MURSHID
Former Mayoral adviser on regeneration, involved in projects, including Black Londoners' Forum. He resigned all posts after being charged with theft in a case involving his work as a Tower Hamlets councillor. He was acquitted. Also an LDA board member at the time of the grants.

JASPER'S RESPONSE:
On the wider allegations of improperly using his influence and cronyism, he said: "I have no formal role in decisions they make around funding. I merely provide advice. This is a purely politically motivated attack, and it is also an attack on Black organisations. I am not going to be deterred from championing race equality for all Londoners in the way I have been for many decades."

Livingstone and Jasper have so far failed to respond to 80 specific questions about the disputed organisations from the Evening Standard and are now likely to use the police probe as an excuse not to give answers to the news media or London Assembly. But will Livingstone's infamous street cunning and trickery save his neck when he is up for re-election on May 1?

Skateboarding is the works so let's keep it going

Why closing rehab centre for teenagers is wrong

1 Response to "Mayor calls in police and suspends key adviser"

<p><strong><u>Chris Gaynor</u></strong></p> Why not make the Mayor's advisors jobs, earnings and anything else they get involved in public from a register of interests, then, Londoners will know exactly who is dipping into the public purse and who is doing what. The secrecy of London's central government must be overturned!