Mental illness affects one in nine US soldiers 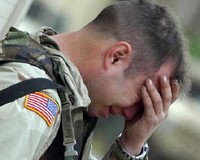 The number of soldiers forced to leave the US Army solely because of a mental disorder has increased by 64 per cent from 2005 to 2009 and accounts for one in nine medical discharges, according to Army statistics writes Gregg Zoroya.

Last year, 1,224 soldiers with a mental illness, such as post-traumatic stress disorder (PTSD), received a medical discharge. That was an increase from 745 soldiers in 2005 or about 7 per cent of medical discharges that year, according to personnel statistics provided to news website USA TODAY.

The trend matches other recent indicators that show a growing emotional toll on a military that has been fighting for seven years in Iraq and nine years in Afghanistan, the Army and veterans advocates say.

Soldiers discharged for having both a mental and a physical disability increased 174 per cent  during the past five years from 1,397 in 2005 to 3,831 in 2009, according to the statistics. 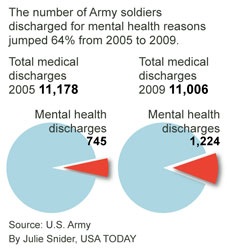 Aggressive efforts to identify and treat mental illnesses by medical officials, Porter says, are also why more soldiers are being discharged.

However, veterans groups argue that the failure of early detection and treatment allow mental illnesses to fester into problems so severe that a soldier must be discharged from the service.

"The military is excellent at treating visible wounds," says Joe Davis, a spokesman for Veterans of Foreign Wars. "The military and entire medical community at large still have a long way to go to effectively and reliably screen and treat wounds to the head and mind. Before discharging troops for behavioural reasons, it is absolutely imperative that commanders first ask 'What caused this?' "

A Pentagon analysis in May reported that in 2009, for the first time in 15 years, mental health disorders caused more hospitalisations among U.S. troops than any other medical condition, including battle wounds.

Governments exposed over need for 'war on terror'

What's the real story behind the Haitian disaster?