Missing indigenous women and a US media blackout

On July 5, 2013, Hanna Harris, a member of the Northern Cheyenne tribe, was reported missing by her family in Lame Deer, Montana, US. After search efforts by community members and law enforcement, she was found dead five days later. While there was some coverage of the disappearance and death of Harris, the media initially took the opportunity to focus on her use of peyote for ceremonial practices or to suggest her death was the result of drug use.

The Lame Deer tribal authorities were initially responsible for taking the missing persons complaint and assisting with the search, and according to the family were not quick to act (the authorities have not responded to Salon’s request for comment). The FBI, which has federal authority over reservations in cases of murder, has said it needs more information and testimonies from others before being able to move forward with the Hanna Harris case. So Harris’ family developed a reward fund in an attempt to entice witnesses and those with information to come forward. The efforts of the family have allowed the investigation to remain open and ongoing.

Hanna Harris matters and deserves respect, as do the hundreds (possibly thousands) of indigenous women who have also gone missing and murdered. Unfortunately, Harris’ story - a death so far uninvestigated by government authorities - is ubiquitous among indigenous people. A year ago my co-worker Laura M. Madison and I launched the Save Wiyabi Map, a project to keep track of missing and murdered sisters. In that time, we have tracked 1,050 violent incidents involving indigenous women - women who have disappeared, or who have been found dead.

Starting this map and database was important because the governments of Canada and the US make minimal effort to keep track of this information. Due to jurisdictional issues and general disdain toward indigenous people, we really have no idea exactly how many indigenous women are missing or have been found murdered - or whether these women’s cases have received adequate investigation.

The media routinely fail to inform the public accurately about the cases of missing indigenous women. As my partner Laura M. Madison states, “Indigenous women go missing twice: Once in real life and a second time in the news.” Missing white women, she explains, are humanised with extensive articles, photos and interviews with grieving families. If missing indigenous women get media coverage at all, they are usually presented as runaways, drug addicts or sex workers, or portrayed in other ways society sees as negative. As with Hanna Harris, many indigenous women are treated by law enforcement and media as undeserving of attention or care because they’re supposedly “party girls,” whether they were actually engaged in drinking and drugs or not.

We know from existing as indigenous people and doing this work that this triple disappearance is everywhere across this continent. As Andrea Smith has detailed, “violence against Indigenous women in a symptom of colonisation.” The rate of violence, the lack of response, the structure that 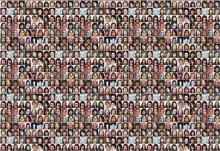 helps it continue: This is settler colonialism, the occupation of the land by imperial powers and people that stand on top of indigenous nations. Both Canada and the United States are settler states.

There’s a myth that we’re now just a multicultural society and that the structures of slavery and genocide no longer affect us - that indigenous people either died off completely or disappeared into whiteness. But we survived. We are still here. We are still speaking our languages, we are still practicing our traditional ways, and we are still dancing in powwow circles. And the structure of the US as a settler state is still trying to get rid of the “Indian problem.” A friend once told me, “If we were killed off or killed each other off, that would make the government very happy. That would be doing them a big favour.” And actions of the state make this plain. We see it in their disregard of indigenous life, evidenced by the federal authorities’ refusal to take seriously the disappearance and murder of Hanna Harris and so many others.

All over the continent, indigenous women are resisting. Today is the day of the annual 23rd annual women’s memorial marches that started in the Downtown East Side of Vancouver (DTES), British Columbia. The marches began as grass-roots initiatives to search and demand justice for those who were missing and murdered. They now happen in at least nine major cities across Canada.  As the mission statement on the women’s memorial march page states: “This event is organised and led by women in the DTES because women, especially Indigenous women, face physical, mental, emotional, and spiritual violence on a daily basis … We gather each year to mourn and remember our sisters by listening to their family members by taking over the streets, and through spiritual ceremonies.”

It’s important that we remember every life that has been taken. These women do live on, and I’m proud to stand in solidarity with organisers and families of the memorial marches today and every day. I’m honoured to research and map, to educate and organise around interpersonal violence, and to gather with other people to generate ideas and solutions to address, stop and heal from generations of pain. Today I mourn the loss of lives and recognise the pain of families and communities. I also celebrate indigenous resistance and power of our people coming together across the continent to say that our lives do matter, and that we’re not going anywhere. Through efforts to exterminate, silence and erase us, we remain. We remain and we will continue to sing, dance, pray, to dismantle systems of oppression and love one another, to heal and fight. We remain.

* Lauren Chief Elk is an organiser, researcher, and co-founder of Save Wiyabi Project.