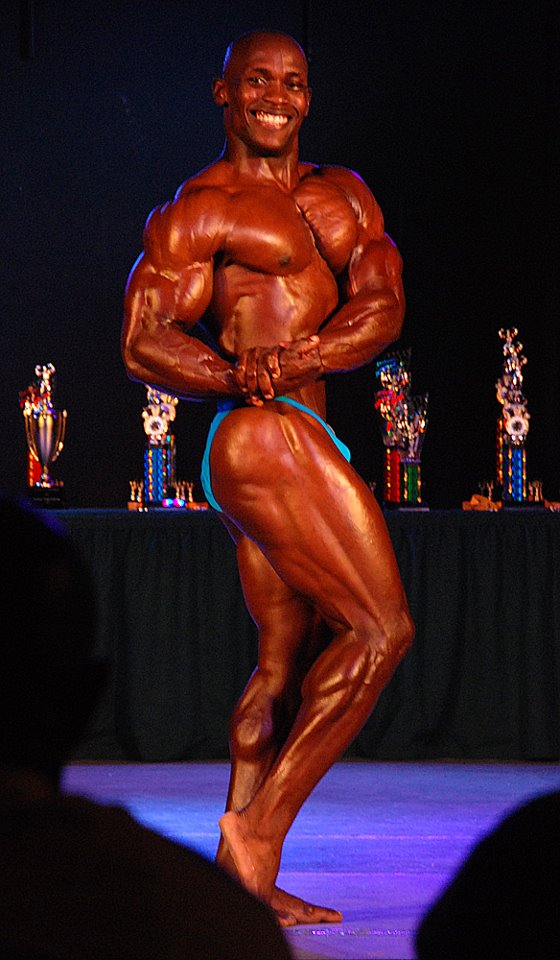 Stevenson Belle is creating quite a storm on the Barbadian body building scene following his clean sweep of all the titles the sport has to offer on the Caribbean island. The rugged coast guard is a shiny, muscle-bound example of sheer grit and determination.

Belle, a late starter aged 30, took home the title of Mr Novice 2010 at a competition held by the Barbados Amateur Body Building and Fitness Federation in April of that year. His amazing physique won him media accolades.

The Nation newspaper noted at the time that  Belle was a mere “novice” under the guidance of top trainers Eareal “Tiger” Johnson and former Barbados body building champion Roger Boyce. But, in anticipation of greater thing to come, he was also described as having ”huge shoulders and arms”.

A media pundit commented that “Belle has one of the best all round packages I’ve seen in this sport in Barbados for years” and “he is blessed genetically”. The newcomer further stunned the bodybuilding world when, in April 2011 he easily won Mr Bridgetown, a title named after the country's capital.

At that time the Barbados Advocate newspaper described him as having “well-defined abs, a chiseled back and a broad smile“. Other comments were that he was "in a class of his own” and “brought the crowd to its feet with his double bicep poses." The paper added: "It was an awesome display.”

As recently as August 2011, Belle took the title of Mr Barbados. It was his debut appearance at the national competition. As a first timer, Belle has made history by winning every competition he has ever entered. Also, he became the first man to hold the titles of Mr Bridgetown and Mr Barbados in the same year.

According to the Nation, he triumphed because of his "shredded eye-popping" and "chiselled muscle". But it was his double-biceps pose and trademark sliced hamstrings and striated quads that sent the crowd wild.

With his stylish clothes on, Belle is fast becoming a fashion icon known for his high-end attire. Some men in Barbados are starting to follow the snappy way he dresses.

It is obvious to many in the body building fraternity that Belle has the potential for world class status. Yet, surprisingly for someone so talented and eye-catching, he has no sponsor right now.

His high-performance competitions to date have lead to him taking part in regional performances by heading a team of athletes attending the Central and Caribbean Championships taking place in El Salvador mid-September.

Belle works with the Barbados Defence Force, hence he has a huge potential to niche market to military men around the world. But he has a fan base that goes much wider than the services and includes adoring females from across the globe so much so that a Facebook fan page has been created for him by admirers.

Talking about the lack of sponsorship on the island, Belle said: "My aim is to go pro and make a living out of it. There is a challenge with regards to sponsorship since corporate Barbados tends to place most of its funds into cricket."

Yet he remains optimistic that now the sport is fast gaining popularity among the younger generation on the island attracting sponsorship will become easier.

Reflecting on his latest title, a smiling Belle said: "I new that I had won when my coach commended me back stage about my conditioning."

The eager audience knew once he had stepped on stage that Belle had won the crown with his all-round conditioned package and girating hips performance. For those people who wish to also gain the body beautiful, complete with the energy that Belle displays, he advises: "Be consistent with training and diet because consistency is key. And live a balanced and outgoing social life."

Of his new found fame he said: "I feel overwhelmed; on top of the world and I'm loving every minute of it."

His meteoric rise to fame has attracted the attention of bodybuilders around the planet who are now watching with baited breath to see if he can pull off his success internationally.

Foreword and Executive Summary of Media and the Riots report

UK and US workers join to form 'super-union'

Served up alive and 'hurting'?