Newspapers and broadcasts around the world have rightly been filled with coverage of the life and times of Muhammad Ali since his death last week. But it concerns me how big media have hijacked his legacy by whitewashing it, for instance, by calling The Greatest a “civil rights activist” rather than the Black power militant he was.

I went on Channel 5 News last night, with heavyweight former world champion David Haye, and was given about two minutes to say this.

For me, Muhammad Ali was my childhood hero and role model. He was not only a sporting giant, the likes of which has never since been eclipsed, but a prominent person who fearless told Black truth to white power. 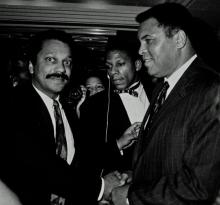 You can see in the photograph of the two of us how wide-eyed and dazzled meeting The Greatest made me. It was US black hair care giant Lusters’ glittering ball in Mayfair’s posh Grosvenor House hotel, on Sunday, 21 November, 1993. I had no idea my childhood hero was there until photographer Derron Curtis, who knew me from my Thames Television reporter days, said: “There’s someone I know you’d love to be pictured with.” Star-struck fans mobbed Muhammad Ali.

My friend Paul Williams, doing security, flanked the three times boxing world champion. By then it was a decade since Parkinson’s syndrome had first ravaged Ali’s body – the devastating result of sledgehammer blows that would have killed most other boxers. He was a waxwork of his former self, but managed a smile, immaculately dressed in crisp white shirt, colourful tie and pin-striped suit. 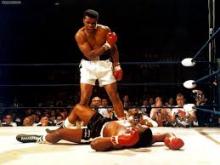 Newly crowned world heavyweight champion Lennox Lewis was there too. Ron Seymour, who ran Moonlighting night club and was an Ali friend, had brought him along. Later, that evening I was called to the stage to be given a trophy in recognition of my organisation the Anti-Racist Alliance’s work helping parents Doreen and Neville Lawrence set up the Justice for Stephen Lawrence Campaign. Their son had been murdered in a racist attack earlier in April. The same year I had arranged a meeting between Doreen, Neville and another black icon, Nelson Mandela.

The African National Congress leader, a former amateur boxer, revered Ali, as can be seen in TV news footage of them together. Of the two, Ali had been the role model inspiration since my teens. He got me to put on gloves as a 13-year-old and box at the Surrey school where I was the only black student. My coach, Mr “Bullet head” Whelan, told me off for attempting to imitate Ali by dancing around my opponents and jabbing them as fast as I could. “Keep your feet on the ground, you’re not Cassius Clay,” he bellowed. Bigots, including British champion Henry Cooper, whom Ali beat, refused to pay the champion respect by calling him Muhammad Ali, the “Black man’s name” he had adopted to replace his “slave name” after converting to Islam.

My mother and I stayed up until the early hours listening to Ali’s epic fights on the radio. A cocktail of emotions gripped us - melancholy when he lost, most memorably to hard man Joe Frazier, “the greatest after me,” said Ali. And ecstasy when he won the “Rumble in the jungle”, against world champion George Foreman, and the “Thrilla in Manila” rematch against Frazier. Like millions of others, Ali filled me with immense pride in my Blackness. He brought ballet to heavyweight boxing by “floating like a butterfly” and “stinging like a bee”.

Ali’s Black militancy shaped my politics. Never before had a Black sports champion been so outspoken. Ali, the Louisville Lip, was the master of boxing match-selling hype but sometimes went too far. He called Frazier “ugly as a gorilla” and an “Uncle Tom”, deeply offensive, racially charged words he was later to regret. 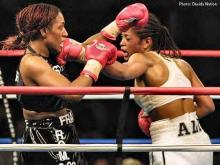 On 8 June 2001, a quarter of a century after the Manila fight, I saw from ringside, the daughters of Ali and Frazier box each other in up state New York. Laila Ali, 23, and Jacquelyn Frazier-Lyde, 39, went toe to toe for eight explosive rounds, with Ali winning a split decision.

Her father’s brave politics led him to being banned from boxing for more than two years because he refused to fight in Vietnam; the population of whom he said had never called him a “nigger”. It was something to which the oppressed people of the world could relate. I remember his portrait on the walls of shops and other public places being more popular than the Queen’s in outlets owned by people of all races, colours and faiths.

Voted BBC sports personality of the century, Ali was a freedom fighter  and a revolutionary who shaped his own image rather than allow the big, white media to do it for him.

The Rev Al Sharpton, the African American civil rights leader I had met in London a year before Ali when I was setting up the Anti-Racist Alliance, summed it up after the death of The Greatest, when he said: “He lived long enough to see those who condemned him praise him and those who repudiated him lift him up. Ali didn’t change, he changed the world.”

* Marc Wadsworth is the founder of the Anti-Racist Alliance and former editor of Blaqsport magazine.