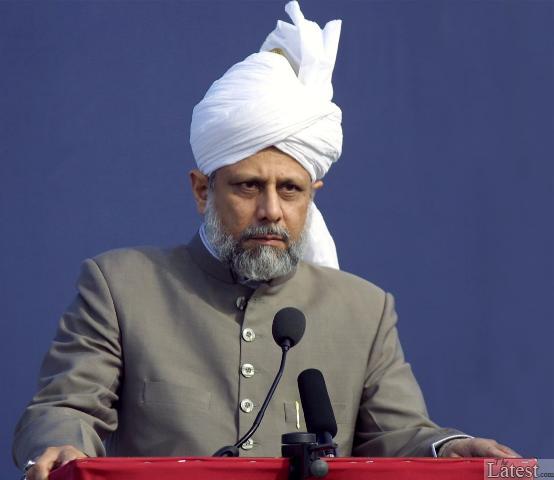 Hazarat Mirza Masroor Ahmad (pictured left), the spiritual leader of the worldwide Ahmadiyya Muslim Community, has called for global peace and harmony and used a gathering in London to take practical steps to rid the world of all forms of extremism.

The Queen Elizabeth II Conference Hall at Westminster was conquered by a large sign reading "Love for all Hatred for None" while various personalities graced the stage to urge the public to create resolutions encouraging a peaceful and cohesive society. In his address, Hazarat Mirza Masroor Ahmad condemned terrorist ideologies and urged people to unite in positive action against extremism.

The evening's emphasis on peace and tolerance stood in striking contrast to the firebrand radicals (such as Abu Hamza) who have featured on the front pages of the news media as advocates of murder and race hate. The event last month was host to the likes of Justice Secretary Jack Straw, Conservative shadow minister Baroness Sayeeda Warsi, Lord Eric Avebury, Baroness Emma Nicholson, and even received messages from prime minister Gordon Brown.In his speech, Jack Straw expressed his delight that the event was happening. He said:  "All of us hugely admire the work of the Ahmadiyya Muslim community in the UK and across the world."

Straw highlighted the importance of community cohesion and raising awareness of the commonalities between the monotheistic Abrahamic faiths.Lord Avebury described the work of the community as "wonderful" and spoke of the many humanitarian projects in different countries that demonstrated the mission of Ahmadi Muslims across the world.

And British prime minister Gordon Brown's message highlighted the valued contributions made by the Ahmadiyya Muslim community in the UK and worldwide, and went on to conclude that the Ahmadis continue to work for the benefit of the whole of mankind. After reading this some of you maybe be wondering who or what is are this religious group? Well, the Ahmadiyya Muslim community has slowly been making its mark upon the world since its establishment in 1889 by an Indian Muslim, Hadharat Mirza Ghulam Ahmad.

The Ahmadiyya movement believes its founder to be the Messiah awaited by not only the Muslims, but the Christians and Jews also.However, for many mainstream Muslims, this belief breaches the Holy Prophet Muhammad's status as the final prophet, and many go as far as to declare them non- Muslims.

So with such controversy, persecution is always expected, in Pakistan, for example, Ahmadis are legally classified as a non-Muslim minority. This means blasphemy laws ban them from engaging in Muslim practices, from using mosques and attending hajj to using the simple Muslim greeting  'assalam-o-aleikom'. However worse than the discrimination is the physical danger they face; a recent example can be seen in Indonesia after a government appointed panel recommended banning the sect, hundreds of Muslims in Western Java set fire to an Ahmadi Mosque.

Still, despite all this, the community now has a following of an estimated 70 million people across the world in more than 180 different countries. They have grown in leaps and bounds and this year commemorates the centenary of its founder's death and the establishment of the caliphate system which continues to promote its message of "Love for All Hatred for none".

Despite this admirable philosophy the community continues to face persecution. In a recent incident 23 Ahmadi medical students were expelled from the Punjab medical college in Faisalabad, Pakistan.The students included eight men and 15 women. Four of the students, all female, were in their final year of college and thus were only months away from qualification.

Despite this the community has never been hindered in the academic fields; Nobel laureates Dr Abdus Salam and Muhammad Zafrullah Khan both made a tremendous impact on history and were firm followers of Ahmadiyya movement.In an interview with The Times newspaper in London, Hazarat Mirza Masroor Ahmad defines the essence of being an Ahmadi Muslim as very simple:  "It's about honesty, loving peace, hard work and being true to the creator."