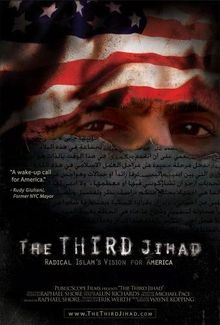 Anti-Islamaphobia campaigners in America have condemned the showing this month of a "loony Muslim-bashing movie" to New York police as part of their counter-terrorism training.

"Our nation's battle against terrorism is only made more difficult whenever security officers are taught to view all Muslims, and the faith of Islam itself, with suspicion," said Zead Ramadan, New York Board President of the Council on American Ismaic Relations.

"We call on Commissioner Kelly to order an internal probe of how this propaganda film came to be used and to put policies in place to ensure that NYPD training is not biased by agenda-driven materials - or trainers - targeting any religious or minority community."

Ramadan said he has asked for a meeting with NYPD (New York Police Department) officials to find out how cops came to view The Third Jihad –  72 minutes of gruesome footage of bombing carnage, frenzied crowds, burning American flags, flaming churches, and seething mullahs.

All of this is sandwiched between a collection of sombre talking heads informing Americans that, while they were sleeping, the international Islamist Jihad that wrought these horrors has set up shop in the US and is quietly going about its deadly business.

This is the final drive in a 1,400-year-old bid for Muslim world domination, the audience is informed. And while we may think there are some perfectly reasonable Muslim leaders and organisations in the US, that is just more sucker bait sent our way.

Award winning New York based website The Village Voice.com who broke the original story also wanted to know how police came to view the gruesome film after a cop complained that he and others undergoing anti-terror training were made to sit through the movie this month at a police training facility in Coney Island.

Deputy police commissioner Paul Browne initially said the film had never been shown to cops, but later confirmed that the movie was shown at least twice. The screenings were a mistake, Browne said.

The movie is the product of a non-profit company called the Clarion Fund, whose chief business appears to be stoking the flames of religious war. Just before the 2008 presidential election, the fund sent copies of Obsession, an earlier film also depicting murderous Muslim conspiracies afoot in the US, to some 28 million swing-state voters. No one has ever confirmed who footed the bill for this mass mailing, but Clarion's tax filings show that sugar-daddies unknown anted up $18 million to do so.

The producer of both films is a man named Raphael Shore, who has also worked with an Orthodox Jewish Israeli group called Aish HaTorah that regularly cites the threat of radical Muslims. Calls to Clarion didn't bring a response last week, but the film's narrator, a Muslim-American doctor named Zuhdi Jasser, was reached at his office in Phoenix. "It's a hard-hitting film," he said, although he voiced a couple regrets with the final product. "I would have given more time to the solutions," said the doctor. "That the solutions can come from within."

*This is the trailer for The Third Jihad:

All aboard on Twiggy's breast cancer charity boat