Boko Haram must be a dream come true for the sharks waiting to devour up Muslims. 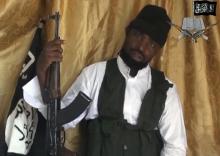 Seriously, you can’t ask for a better pantomime villain than its leader Abu Bakar Shekau. The guy has an air of insanity about him. The way he speaks, you can tell he looks like he’s relishing the power given to him by virtue of his evil act of kidnapping more than 200 schoolgirls from a boarding school in Nigeria on April 14.

You may be able to see what I mean here. Some Muslims get rather indignant when I say “we need to be proactive to overturn Islamofascism”. They feel that they shouldn’t be associated with such acts. I wholeheartedly agree.

I don’t like being associated with such acts either. Sadly, we don’t live in a world of should and should nots. We live in a world of “is” and “is nots” and the sad fact of the matter is this: Boko Haram has made an overt claim to the Islamic identity.

Abu Bakar Shekau has made a few references to Allah, believing Allah told him to abduct the schoolgirls. In his latest video he claims he’s liberating the girls by giving them Islam. I beg to differ; he’s giving them terror, which is the opposite of the peace Islam should bring. This guy has it the wrong way round.

I was especially annoyed because he made these girls (most of whom are Christians) recite the Quran. This man is so demented that he thinks by making these girls read the Quran in the state of terror he induced on them, that they would be made Muslim?

No, I don’t believe so. If I had to guess, I would say this man is on a power trip. Nothing more. Religion has nothing to do with it.

What do we need to do about this?

We the Ummah [the faithful] have a lot of work to do to clean the reputation of the Quran and Islam from evil men like Shekau. This requires social action.

Is this an apology to our fellow human beings? No, we didn’t do anything wrong so we don’t need to apologise. What we do need to do is to liberate Islam and the Quran from the mud which Shekau is us dragging through. And guess what? It’s actually the requirement of the Quran to confirm ad-deen (see Ch 107 of the Quran).

I call this programme Social Salah.