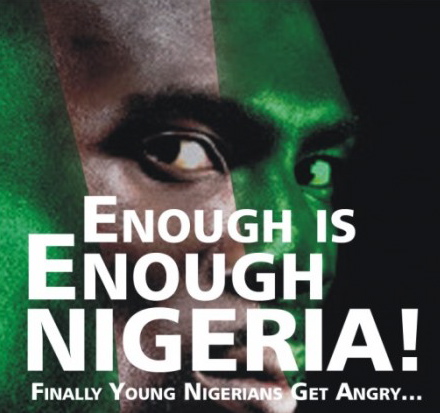 Enough is Enough. I’m sick and tired, angry and frustrated.  And as the popular American phrase (from the movie Network) goes: “We’re mad as hell, and we’re not gonna take it anymore.”

Nigerian youths are taking action over the many ills that have plagued the country for decades, but seem to be coming to a head in recent days.

The West African nation’s president, Umaru Yar’Adua, has not been seen in public, or heard from directly, for over 100 days. He returned to the country’s capital, Abuja from Saudi Arabia last month, but there are speculations that he’s on life support at the Presidential Villa.

A five-month petrol scarcity has hit citizens of the oil-producing country hard, hindering trading in many  commercial areas, as well as day-to-day movement across several states. Meanwhile, the masses are still waiting on an oft-promised and never fulfilled government pledge to supply power-cuts-free electricity. Currently, many areas of the country are lucky if they receive 1-3 hours of electricity daily.

The rest of the time, people have to provide their own power through generator sets which pollute the environment, chugging thick black fumes and roaring their engines day and night. Last year, the government promised they would supply at least 6000 megawatts by December. They failed.

Many Nigerians, including notable young professionals, activists and celebrities active on blogs, Twitter and Facebook say it’s time to move their anger from the internet to the streets.

On March the 16, they, and supporters are marching to the country’s legislative body the National Assembly, to vent their frustrations in a peaceful manner. A list of their demands:
•    The resumption, resignation or removal of the president before the end of March.
•    A workable plan to end the country’s electricity issue before the end of this month.
•    The end of the fuel scarcity within two weeks.

As the youth makes plans to stand up and be counted, more violence in Jos, capital of the northern state of Plateau, which has seen more than 500 people killed in clashes between Muslims and Christians since January, is adding to the feelings of frustration, anger and sadness. Via social networks, and in the media, many say not enough is being done to deal with the underlying economic and political tensions spilling over and becoming a religious conflict.

More than 60 per cent of the population comprises of people below the age of 35. Organisers of the “Enough is Enough” rally say they’re tired of being under-represented, and ignored. They say they want to show that they do have the will, and the power to make change.

There’s a popular phrase in Nigeria, frequently used in conversations, found in songs, books, and even on the various brightly painted means of public transportation. It’s simple and short: “The Young Shall Grow.” It lLooks like they’re taking the reins and stepping up.

* For more information, see the the "Enough is Enough" website or to take part in the discourse, search for the hashtags #enoughisenough and #lightupnigeria on Twitter

'Why America's prison population is out of control'