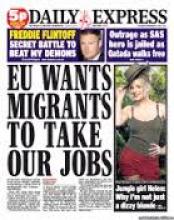 Immigration has been a hotly contested issue in the UK in the last few years. With its negative portrayal in our society, it is often not made clear why immigration can be a force for good.

You only need to take a cursory glance at tabloid newspapers to observe the hyperbole and fear mongering that says Britain is being taken over by immigrants. With headlines such as “white boys are failing in schools because of immigration” and “British families will lose out from influx of cheap labour from Romania and Bulgaria” sections of the press have succeeded in whipping up hate and hysteria among their masses of impressionable readers.

It is little wonder then that figures from the British Social Attitudes 2014 survey found that 77 percent of people favoured a reduction in immigration levels while the UKIP party’s anti-immigration rhetoric has gained support from former Tories and even in some cases Labour party members.

But as a daughter of immigrant parents who came to the UK for postgraduate studies at university, I can safely say that the way immigrants are perceived (particularly exacerbated by right-wing media) is frankly absurd. My dad has been a humanities teacher his entire career in secondary schools in the UK, teaching young people necessary skills to survive in a highly competitive society. My mum is a librarian and university lecturer in London while doing the “second shift”. We have never once “sponged off the state” while sitting at home watching the Jeremy Kyle show, as voracious consumers of the Daily Mail would assume.

Rather, my parents have been making an active contribution to the state through their work and taxes. Anti-immigration simply doesn’t reflect hard working people like my family. And it certainly isn’t just my parents who have been paying taxes and making a positive contribution to public finances. The Organisation for Economic Co-operation & Development published (OECD) a report in June 2013 revealing that migrants in the UK pay more tax than they use public services.

Yet newspapers and politicians fail to mention that as a result of immigration to the UK, British taxes are lower and the deficit is smaller.

This country alone is the product of thousands of years of immigration from across Europe and the rest of the world. Diversity only makes us stronger.

Britain has prided itself on its tolerance for LGBT issues, civil liberties and justice, yet immigration is still a controversial subject.

I long for the day that we can celebrate the diversity of the British population but whether that’s happening anytime soon is highly debatable.

* Layla Haidrani was a shortlisted entrant in the Young BME Columnist of the Year 2014 writing competition.