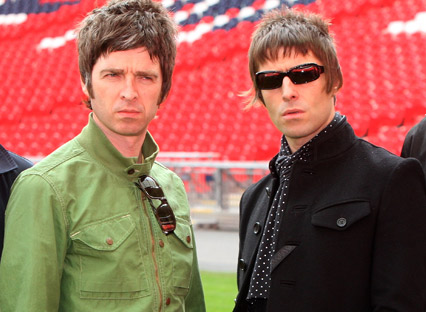 Noel and Liam Gallagher may have split up five months ago but the demise of Oasis has not stopped it from picking up three nominations at the NME music awards, including best British band.

Oasis won the same award last year before subsequently breaking up in August when lead guitarist and chief songwriter Noel walked out, saying he could no longer work with his brother Liam (pictured right with Noel), Oasis's front man.

The band is also up for best video for Falling Down and best live event for a homecoming gig at Manchester's Heaton Park, UK, last summer.

Oasis is one of a clutch of guitar bands to dominate the NME awards shortlist, despite the buzz about female solo artists currently dominating the music industry.

While 21 out of 29 of the nominees could be classified as "boys with guitars", the best solo artist category looks more diverse. Nominees include British rappers Dizzee Rascal and Jamie T, as well as Lady Gaga and Florence and the Machine.

NME editor Krissi Muris defended the shortlist, which was voted for by NME readers and the bands' fans. "It is the one ceremony where you see the bands who have really meant something and made a difference get justly rewarded."

Around 1.3 million votes were received for the shortlist, she added. NME readers will also vote for the eventual winners, to be announced at London’s Brixton Academy on February 24

Will Smith, sex rumours and the Church of Scientology

Sony Are Not Playing Around