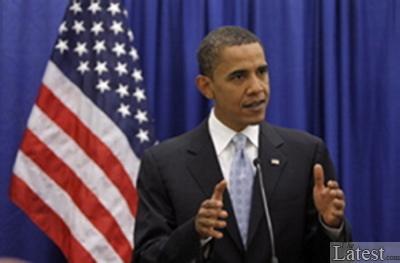 Media chiefs for the Barack Obama campaign have confirmed to The-Latest that the American presidential hopeful WILL visit Germany to give a keynote speech on Thursday. But top sources at Obama's Chicago headquarters say that even they do not know whether or not the US senator will visit France or Britain - such are the extremely serious security concerns surrounding his whistle stop European tour.

Obama has visited Afghanistan, where he met president Hamid Karzai, and he is currently in the Jordanian capital, Amman, meeting King Abdullah.

He said in the first news conference of his trip abroad that security in Iraq has improved but the country's needs must now be addressed politically.

Earlier,Obama held talks with Sunni tribal leaders in the western Iraqi province of Anbar. After meeting King Abdullah, Obama was expected to travel on to neighbouring Israel.

His campaign refuse to comment on his planned visit to Israel and Palestine. The only details they have released are about the German leg of the trip where Obama will make a President John F. Kennedy style historic speech.

The official communique from Chicago reads: "On Thursday, July 24, 2008, Senator Barack Obama will visit Berlin, Germany. Obama will give a major speech on the historic US-German partnership, and the need to strengthen Transatlantic relations to meet 21st century challenges in front of the SiegessÃ¤ule at the Grosser Stern in Tiergarten Park."

The event is free to the public. Tickets are not required. Gates open at: 4:00 PM. The event is on the east side of the park.

Additional event updates for members of the public will be posted at www.barackobama.com/berlin

Outspoken young woman who has solutions for Africa