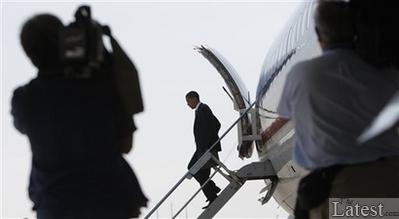 Barack Obama's planned trip to Britain is shrouded in mystery amid very serious concerns about his safety being voiced by security experts. One high level American diplomatic source did not list London at all among the Democratic Party candidate's stop offs during his shuttle cock tour of the Middle and Europe.

They told The-Latest that Obama will be in the Jordanian capital, Amman, tomorrow to meet King Abdullah. The senator is currently visiting Afghanistan where he has said that American troops should be withdrawn from Iraq and put there instead. But some Afghanis have said US forces should be moved out of the country's cities, stop killing civilians, and concentrate their fire power in the south where most of the Al Qaeda fighters are based.

On Tuesday, Obama is scheduled to meet Israeli prime minister Ehud Olmert. Then the following day he travels to the West Bank town of Ramallah for talks with Palestinian president Mahmoud Abbas. He travels to Germany on Thursday for a meeting with German leader Angela Merkel and then it is the turn of French president Nicolas Sarkozy on Friday. US officials have raised security concerns to levels not seen since the Illinois senator began his presidential bid earlier this year.

Coming just weeks after shots were fired at Israel's Tel Aviv airport during a farewell ceremony for France's Sarkozy, from an apparent suicide of a security guard, Obama's trek to the region has become a serious logistical and safety challenge.

A concerned US government official explained: "I would prefer if he did not make the trip to Ramallah." He added: "And he must use extreme caution throughout Israel at this time, in my opinion, especially Jerusalem."

Apparently, a planned foot tour of Jerusalem's Old City has been called off, a senior source revealed.

A leader of an official Obama campaign in London, whose members were expecting to meet the presidential hopeful, told The-Latest she was buying an airline ticket to meet him in Berlin now. Unlike Britain, France and Germany did not support US president George Bush's invasion of Iraq. British prime minister Gordon Brown is currently visiting political leaders in the Middle East. But he is said to be keen to meet Obama in London this week.

People fight back against thieving banks and cuts