White House hopeful Barack Obama spoke to an adoring crowd of more than 100,000 Germans in Berlin. He told them that the US and Europe have drifted apart and it is time for the two great nations to come together again. 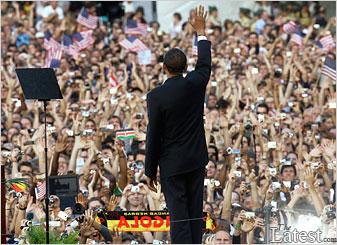 But the American news media reported today that Obama's Republican rival John McCain has closed the opinion gap to a "statistical deadheat" by staying in the US and concentrating his speech-making on the No. 1 issue for voters - the economy; the housing bust, the spiralling cost of fuel and food.

Obama met German leaders, including Chancellor Angela Merkel, then he gave his keynote address in which he said: "If we're honest... we know that sometimes, on both sides of the Atlantic, we have drifted apart and forgotten our shared destiny."

His words were broadcast live in Germany, where he is a popular figure.

"While the 20th Century taught us that we share a common destiny, the 21st has revealed a world more intertwined than at any time in human history," Obama added, speaking near the Victory Column in the central Tiergarten Park.

"In Europe, the view that America is part of what has gone wrong in our world, rather than a force to help make it right, has become all too common," he continued.

"In America, there are voices that deride and deny the importance of Europe's role in our security and our future."

"But the burdens of global citizenship continue to bind us together," he added. "In this new century, Americans and Europeans alike will be required to do more - not less. Partnership and cooperation among nations is not a choice. It is the one way, the only way, to protect our common security and advance our common humanity." 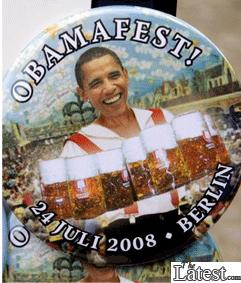 Obama will be hoping that once TV pictures of him addressing cheering crowds of Berliners have been beamed back to America it will boost his image as an international statesman, and his chances of beating Republican rival John McCain this autumn.

Obama flew to Germany after visiting Israel and the West Bank and is due to visit France on Friday. A flying visit seems to be back on the agenda after concerns he might skip the UK. Sources say Obama will visit London on Saturday, on his way back to the US, after a successful world tour which took in Afghanistan, Iraq, Jordan, Israel and Palestine.

Security is tight in Berlin, with one report that the hotel where Obama is staying in Berlin was closed off after a suspicious package was found.

* Barack Obama's campaign has received roughly 10 times more money from declared US donors living in Germany, France and Britain than his Republican rival, John McCain, reflecting his popularity in Europe as he makes his first tour of the continent.

Federal Election Commission reports show Obama has raised $1 million from donors who identify themselves as Americans living in Great Britain, Germany and France, while John McCain has taken in $150,000.

<p><strong><u>Chris Gaynor</u></strong></p> Will US voters want another statesman like showmanship style politician Obama? He certainly has the panache and the style, but only time will tell if he has the substance!