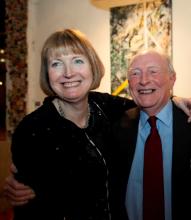 Labour's Harriet Harman, Member of Parliament for Camberwell and Peckham in south London for the last 33 years, made her bid to be re-elected at a highly charged rally of town hall politicians and activists at the Peckham Pelican cafe and restaurant in the heart of her constituency last week.

Speaking to the boisterous crowd of supporters, Harman, 64, laid out her stall for getting rid of the "disasterous" Conservative-Lib Dem coalition government and returning Labour to power next month. She was cheered on by the gathering, which included

A party elder statesman, whose political popularity is experiencing a revival in the labour movement because of his powerful oratory and seeming return to his left-wing roots, he was the star turn. Kinnock, 73, the former Labour leader (1983 to 1992), who now sits in the House of Lords, skilfully rallied the audience of Labour Party "troops". They listened attentively and clapped enthusiastically to his scorching attack on the David Cameron led Conservative Party, for their "repeated lies, deceit and dangerous untruths".

Kinnock said that, in cahoots with the pro-Conservative British press, they had brainwashed voters into thinking Labour caused the economic crash when the party was in power and claimed this "great lie" was "almost on a scale practised in Germany

before the war". But he insisted he wasn't comparing the Conservative leadership with the Nazi criminals' term "big lie", which was used by Adolf Hitler in his book Mein Kampf to smear Jewish people. In fact, said Kinnock, contrary to what the Tory leadership were saying in their vile propaganda, Prime minister Gordon Brown and Alastair Darling, the chancellor, had saved the economy "with moments to spare".

Kinnock flatteringly referred to Harman as "Deputy prime minister", a post she would occupy if Labour wins the general election on May 7.