Palestinian tragedy ignored by the world 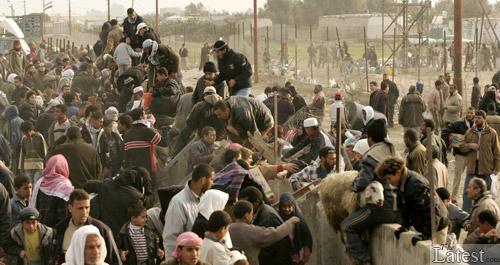 It was a heart-wrenching story, writes Gary Kamiya. Hundreds of thousands of people, trapped for endless years in an open-air jail and recently subjected to an airtight siege, blew up their prison wall and poured out to freedom.

A 24-year-old man named Fares Al-Ghoul talked to the Chicago Tribune. "It was like a dream," Al-Ghoul said. "Suddenly in the morning we found out that we could travel. Everybody started to rush to the border, and I found my way inside. We walked a few kilometers but we were not tired. I was ready to continue walking forever. I wanted to explore everything. It was a taste of freedom."

Freedom. It's the ultimate American ideal. It's what George W. Bush says he launched his "war on terror" to defend. But because this is Gaza, and the people are Palestinians, their freedom isn't worth defending. Al-Ghoul is not going to walk forever, or even for more than a few days. He and the rest of his fellow prisoners are going to go back to their jail. And we're going to forget about them.

America can't deal with the Gaza breakout, because it shows that Gaza is a jail that we own the key to. The crisis undercuts our simplistic narrative about the Middle East. If the noble "war on terrorism" turns out to include keeping a million and a half people locked up indefinitely, it's better not to think about it. The inmates should just return to their cells, behave themselves, and wait for further instructions. If it takes 40 more years for them to get out, so be it.

"Mr. Gorbachev, tear down this wall!" "Something there is that doesn't love a wall." Ronald Reagan's famous injunction to Mikhail Gorbachev and Robert Frost's line speak to something deep in the American conscience. But when it comes to the Israeli-Palestinian conflict, that conscience is asleep. Even the sight of hundreds of thousands of desperate people, one-fifth of Gaza's entire population, rushing out to buy oil and medicine and cement doesn't awaken it.

Of the mass breakout, the Associated Press wrote, "It ... reminded the world that 1.5 million Gazans, many already bitterly poor, cannot remain locked up indefinitely." It may have reminded the world of that, but it certainly didn't remind America. Secretary of State Condoleezza Rice blamed Hamas for the crisis and issued a call to deal "creatively" with the situation, a response the respected moderate Lebanese commentator Rami Khouri called "an ethical weapon of mass destruction." "Why 'creatively'? Is this a kindergarten finger painting class?" Khouri wrote. "Why not deal with the Gaza situation on the basis of more compelling adult criteria, such as legality, legitimacy, and humanity?"

The Washington Post ran an editorial that attacked Hamas for derailing the peace process, belittled Palestinian suffering (it referred to a "humanitarian crisis" in scare quotes), scolded Gazans for "blowing up international borders," and concluded by testily demanding that they stop making trouble and wait for the "peace process" to go forward (that is, go back to jail and wait for another few decades). The Congress and the presidential candidates, Democratic and Republican, ignored the Gaza crisis, or weighed in with predictably pro-Israel statements.

Even the most progressive candidate, Barack Obama, went out of his way to take Israel's side. In a letter to America's UN Ambassador Zalmay Khalilzad, Obama urged the United States not to allow a resolution condemning Israel's illegal collective punishment of the Palestinians to pass unless it also acknowledged Palestinian rocket attacks, which Israel's latest closure was a response to. "Israel is forced to do this," Obama wrote.

Obama's objection to the resolution as one-sided was legitimate - up to a point. Of course the Palestinian rocket attacks that have killed 18 Israelis in four years are morally indefensible. But as usual with American pronouncements about anything involving the Israeli-Palestinian crisis, Obama's letter completely failed to address the context of those attacks, including the harsh Israeli military actions (including extrajudicial executions) in Gaza that have killed more than 816 Gazans, including 379 non-combatants, since January 2006. And, of course, it failed to mention the most crucial fact: Gaza has been under a brutal occupation for decades.

But even leaving those matters aside, Obama's claim that Israel was "forced" to impose a total siege on the population of Gaza to try to end rocket attacks by Palestinian militants is simply false. Israel was not "forced" to do that any more than America was "forced" to invade Iraq. Yes, Israel has the right to defend itself against the Qassam rocket attacks. But it was not forced to cut off power, medicine and food to do that. It chose to impose that siege (with Bush's obvious, if unspoken, blessing) because it hoped that by punishing the people of Gaza, they would overthrow their Hamas-led government.

One need not defend Hamas to recognise that "sending a message" by punishing the people who live under its rule is a textbook case of collective punishment, which is illegal under international law. Israeli Prime Minister Ehud Olmert not only confirmed that this is Israel's policy, but unabashedly revealed its purely retributive nature.

"We won't allow a situation in which people in Sderot walk around in fear day and night, while Gazans lead a completely normal life," Olmert told members of his ruling Kadima party. "We won't allow for a humanitarian crisis, but have no intention of making their lives easier. And the harder their lives, excluding humanitarian damage, we will not allow them to lead a pleasant life. As far as I am concerned, all of Gaza's residents can walk and have no fuel for their cars, as they live under a murderous regime."

Forget Olmert's pious cant about "not allowing for a humanitarian crisis." The truth is that Gaza has been in such a crisis for years, as Israeli journalist Amira Hass documented in her 1999 book "Drinking the Sea at Gaza." The furour over Israel's latest blockade obscures the fact that Israel has long used collective punishment as a tactic in Gaza. As Hass shows, Israeli policies during the Oslo years had the effect of slowly strangling Gaza. Israel had complete control over the Gaza economy.

Gazans couldn't work or visit sick relatives without Israeli permission. Israel could make life in Gaza better or worse with the flick of a pen. And most damningly, Hass shows that contrary to Israeli claims, Israel's stifling closures (the Strip was completely sealed 18 times between 1994 and 1996, for example) were not carried out solely because of security concerns, but for various strategic reasons.

Death of His Tremendousness Giorgio Carbone