Shops and other high street businesses have reacted with wildly varying comments about the Government tough lockdown rules - everything from empathy to sulking as Britain battles coronavirus plague.

These differences are starkly visible on signs put up in their windows after they were forced to close or did so voluntarily at the end of March to protect customers and staff.

In south London, UK, on Croydon's almost deserted North End, which is normally bustling with shoppers, clothing chain Next displays a notice which ends: “Stay safe and look after each other, Love Next.”

From top brands to smaller businesses, messages in their windows give a clear sign of how much they care about customers and staff on my high street in Croydon.

Clothing chain Next, in a notice that starts "Dear customer", signs off with "stay safe and look after each other, Love Next".

Marks and Spencer said they fully support the government's efforts to "protect the NHS and save lives" and point out their food hall is open and some essential clothing and homeware are also available. Their pay-off line is as amorous as Next's. They say: "Love from the M&S family."

Sophia Davis, 24, who has been furloughed by the City recruitment company for which she works, said: "I'm really miserable at home on lockdown and all I can do is window shop on my way to buy groceries because most places are closed."

Hairdressers Toni and Guy are just as touchy, feely. But, rather optimistically, because the government have ruled hairdressers, barbers and beauty salons won't be allowed to re-open for at least another three months, they say: "Thank you for your support and loyalty and we look forward to welcoming you to our salon again soon. Take care of yourselves, and all in our community."
Barclays bank trumpet they're giving priority to NHS workers when it comes to places in the queue, despite reduced opening hours. 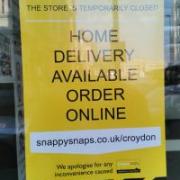 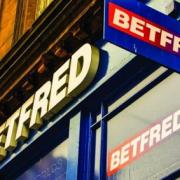 At the other end of the scale, gambling outlets show they're more interested in letting punters know there's no dosh on the premises for thieves to steal. Cashino announced bluntly: "NO CASH LEFT ON SITE."  Says a lot about casinoland doesn't it. In a curt message, BETFRED said its shop was temporarily closed and would re-open as soon as possible.

EE's mobile phone shop aren't much better behaved, announcing: "Following the latest government advice, this unit is closed and secured. All stock has been removed so we can get it to customers in other ways."

Fast-food MacDonald's says: "No cash, food or other supplies remain on the premises. Sorry, we're closed for now. We hope to re-open soon."

At least rival the KFC chicken is more imaginative, with a sign that says: "Really sorry we're closed at the moment. We'll be back at the fryers as soon as possible."

Under the heading, "Store closed until further notice", cut-price clothing giant Primark says it's shut to protect the health and well-being of its "colleagues and customers". Here's hoping they stick to their deal to bail-out super-exploited workers who make the clothes and other products in poverty-stricken places like Bangladesh, as well as cheap labour they use in China, Pakistan and other countries in the Global South.

Department store Debenhams, which you'd have thought after being rescued from threatened bankruptcy would be on its best behaviour, said simply: "We're sorry, this store is closed." The company invited customers to visit its website.

Perhaps usurprisingly, the most grumpy notice is in Wetherspoons pub windows. 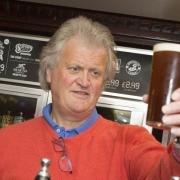 Owner of the cheap and cheerful booze giant Tim Martin, pictured left, who's worth more than £530m, got an embarrassing slap on the wrist from the Government for trying to keep open his almost 900 outlets. Experts have said pubs are a potential hotspot for the spreading of the killer virus.

The Wetherspoons row caused a backlash from the public, who accused Brexit-mad Martin of putting profits before people. He left it to his sidekick chief executive John Hutson to put a notice on their pubs, dated March 22, that states: “Following instructions from the UK Government, we are currently closed until further notice.”

Raj Bhattra, 46, a council worker sent home to do his job from there, said: "I'm at home cooped up with the family and can't even go for a pint at the Spoons [Wetherspoons]. When I read the notice in the window saying it was closed I was surprised it wasn't from Tim Martin. His face is all over newsletters at the pub, normally banging on about Brexit."

Pour me, pour me, Martin.